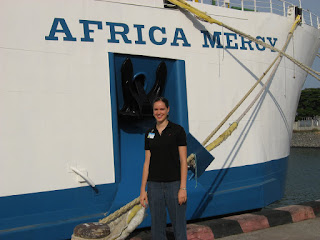 I had a wonderful time in Kpalime (pal-o-may) yesterday! We left at 8am and got back at 7:30pm, tired, sore from whiplash, grimy, hungry, dehydrated, and several thousand cefa less! :)

7:30am - meet on the dock, walk to the port gate to meet up Thomas, a day volunteer who was our guide and hired a mini bus for the trip.

It was about a 3 hour drive to Kpailme. It's only 120 km (80 miles) there... but this is Africa. There were 12 of us in the mini bus; 9 of us, Thomas, the driver, and another African guy (we still don't know why he came with us, especially because he didn't speak good English. Maybe with that many people we had to pay for the driver and his buddy!). 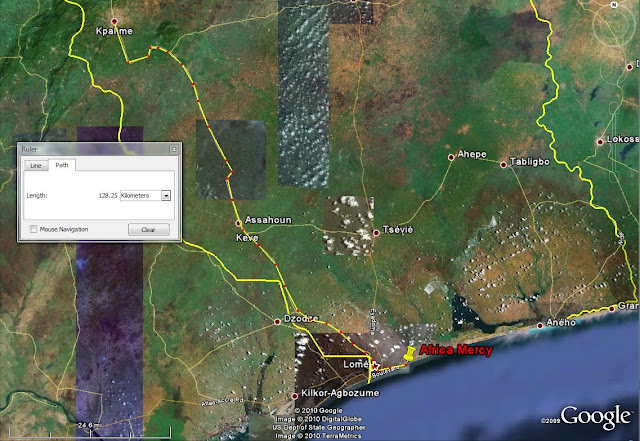 Here in Togo, you have to stop for any Gendarmie personnel. These military men will often sit on their motorbike off to the side of the road and request to see your traveling papers, ask for money (usually only 2,000F or $4 USD), and stop you just because they can. It's all peaceable; just an inconvenience. 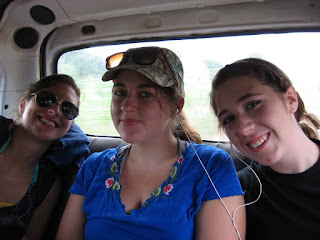 Suprisingly, the roads were pretty nice! There are no lanes, no stripe down the middle to delineate directions of traffic, just a paved road that would be two lanes wide in the US. No speed limit; you drive however fast you want and you weave in and out and pass people all the time. Our driver was amazing and there were countless near misses with smaller vehicles, motorbikes, bicycles, people walking alongside the road, and the random animal that decided to cross. We were going anywhere between 100-120 kph (62-75 mph). I was sitting with Paula and Ruth and we talked some, but it was so noisy with the windows open (air conditioned taxis are unheard of) that we all just watched out the windows and took pictures. Carrie, Christine, and Mari Jo, three of the teachers for the Mercy Ships Academy's Summer Program, were in the back seat. :)

Pictures from the drive: 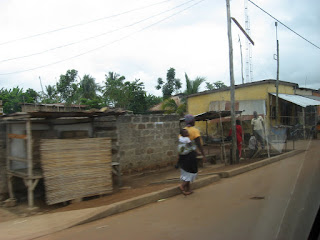 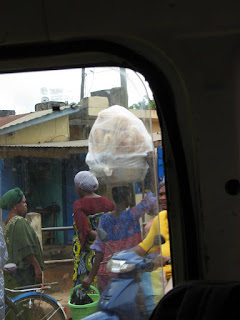 We got to Kpalime, and get on going through for about 30 minutes until we got to Mt. Agou. We stopped about 1/3 of the way up the mountain and took pictures at this waterfall. You can pay for a zimi (motorbike) ride up the top to see the view (I've heard you can look over into Ghana from there!), but it was pretty cloudy and we decided not to waste our time. 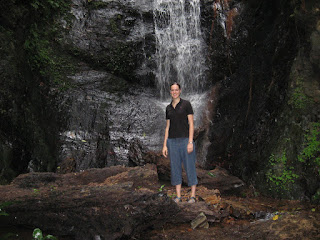 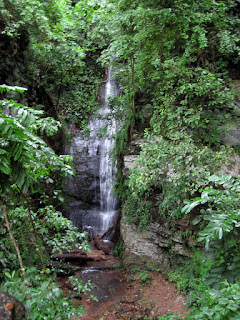 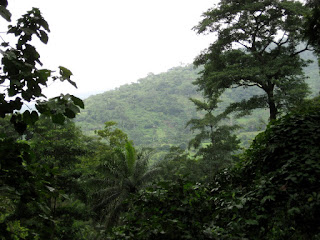 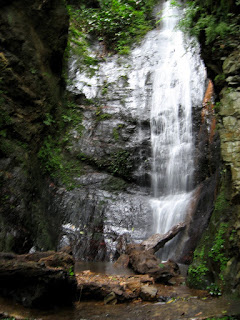 Then we headed to the market. This market was nice because it wasn't centered around the tourists and we could just wander. I bought some fabric, failed miserably with bargaining in French, and was quite happy with my purchase! No pics... Christmas is coming up, Mom!
Pictures from the market (if you look hard, you can see Carrie, Paula, and Mari Jo in the bottom left corner of the second picture): 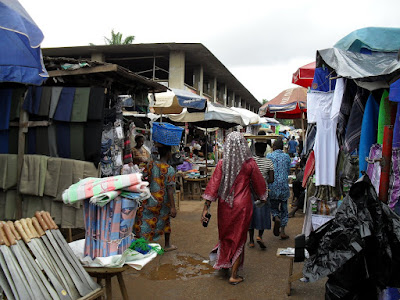 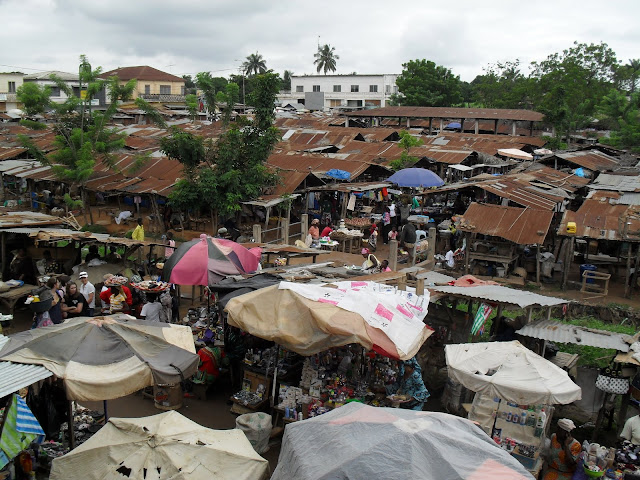 Then we drove to the large waterfall, Cascades de Kpime, also the water source for Kpalime! It was a bit of a drive there and we had to pay 2,000F to drive on the newly constructed road and 1,000F each for a waterfall guide (basically, they won't allow you to drive on that road unless you pay one of their locals to go with you). We parked the mini bus and then hiked about 20 minutes to the waterfall itself. Note to self, Chacos are super slippery on wet wood and rock... do not wear when hiking in tropical jungles! 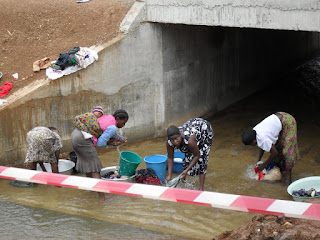 (washing clothes in the culvert that runs under the new road) 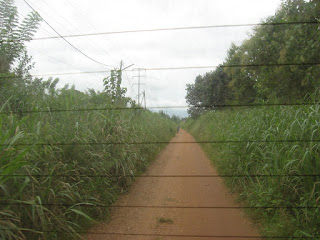 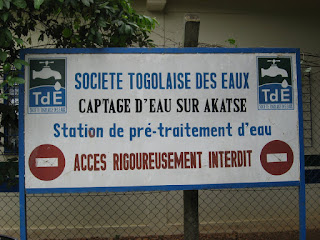 (basically, do not swim in the water, do not wade in the creek, this is OUR water!)
translation, thanks to www.translate.google.com "Togo Water Company, Akatse water collection, water pre-treatment station, access strictly prohibited") 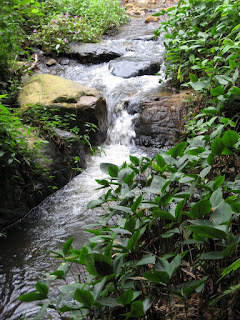 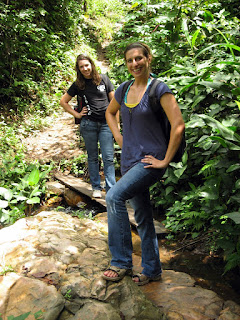 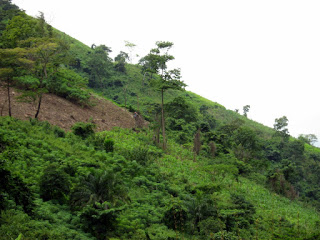 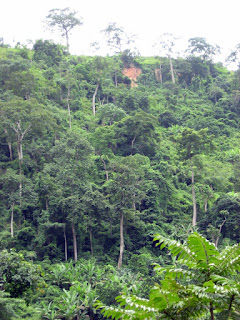 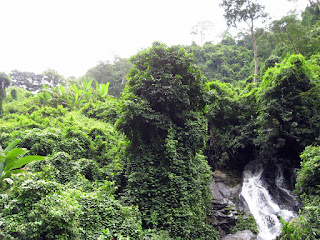 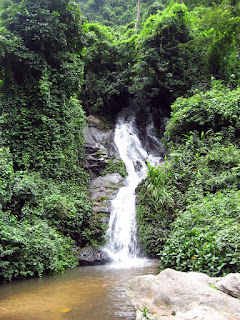 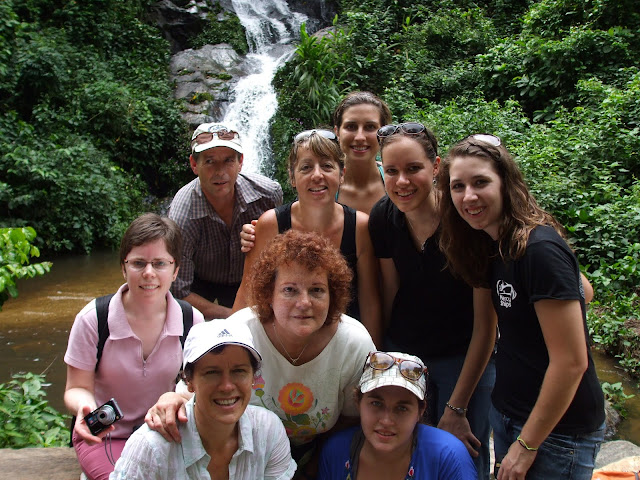 (back row L to R: Paul, Annette, Carrie, Me, Mari Jo. middle/front row L to R: Ruth, Paula, Rainey, Christine)
We piled back into the mini bus and started down the road to drop of our "guide" and head back to Kpalime... and then our driver stopped and turned off at some little tiny road. And pulled up to this little thatched shack... aparently, they sold palm wine and he wanted a drink. We all piled out and after Thomas asked permission from the family we snapped a few photos. It was so random to be there and realize just how dirt poor they were!
Pictures from random stop: 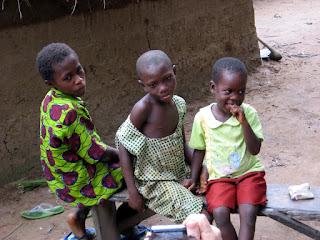 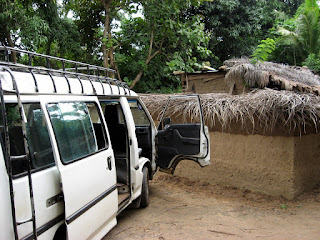 (that is our mini bus, and their HOUSE!) 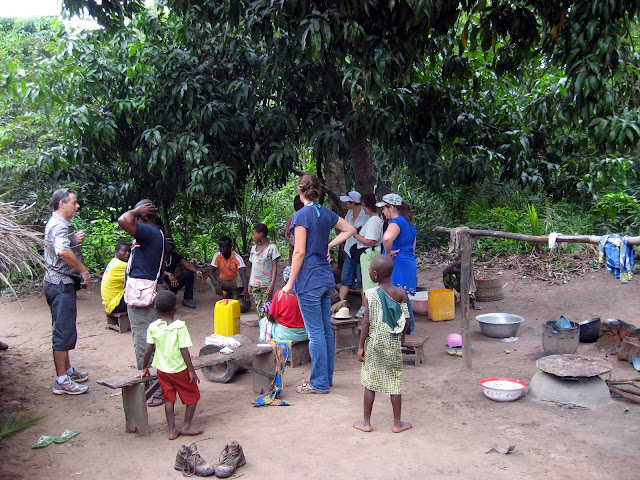 We then got back in the vehicle, headed back to Kpalime, stopped at another market (but didn't buy anything) and then got back on the road to Lome. We stopped about an hour down the road and bought coal and plantains for Thomas' wife who was cooking supper. Phil also bought a bunch of finger bananas and they were SO good! 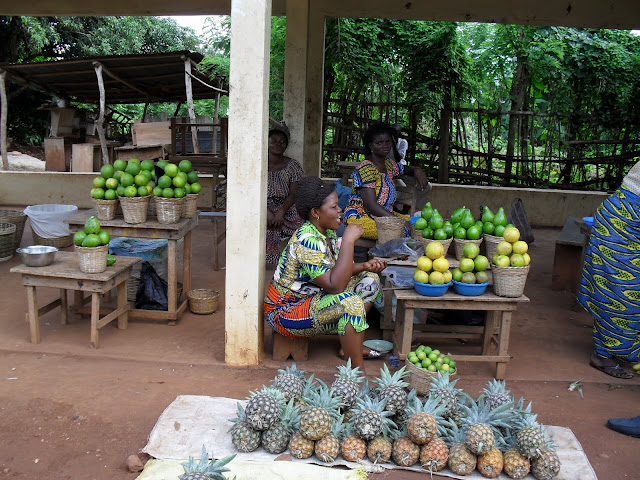 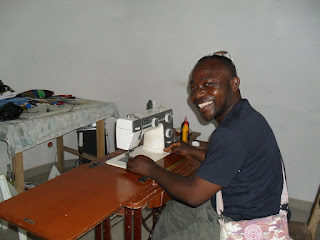 (he is a wonderful tailor and has sewn many things for crew members here... it's a treadle sewing machine!) 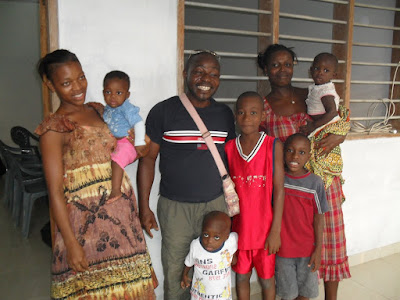 (Thomas' wife and three children... I'm not sure who the other woman and the other two children were. Neighbors maybe?) 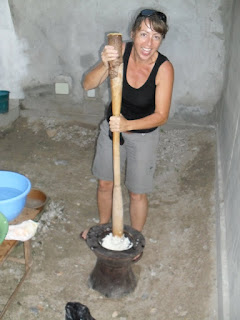 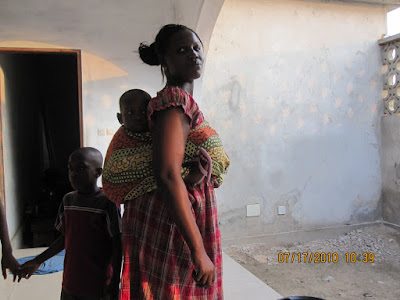 (Thomas' wife, Trina, and two of their children) 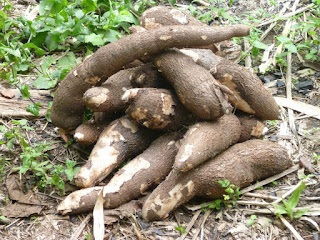 (these are what the yams look like)
Finally arrived back about 7:30pm... after dinner was already over. Thanks to my lovely friend in the dining room, sweet Abi, I got some leftovers for roast beef, potatoes, and green beans. I needed a little protein after only eating bread all day (toast for breakfast as I ran down the gangway--the ship equivalent of "ran out the door", PBJ sandwich I'd carried along for lunch, splitting a loaf of African white bread we bought at the market to stave off hunger). Took my lovely 2-minutes-of-water shower to get rid of all the grime, and dove under the covers at 9pm. Blessed sleep and the ship's rocking instead of bouncing along with 12 people in a crowded mini bus! (Mom, does that remind you of a song?)
*so glad I went to Kpalime. I feel like I've actually seen Togo now!*