Tuesday night Abi and I joined the Jesus Film team from the ship for an exciting evening! The 7 of us packed all the sound equipment, projector, and huge screen in the back/top of the Land Rover and took off. Destination: in front of a local church about 8 km (~5 miles) away. Tuesday nights the team doesn't go out as far; the Friday night trips often take up to two hours to get there!

Along the way we stopped at the Shell petrol station to fill up a petrol can for the generator to power the projector and sound system. We pull up in front of the church, align the Land Rover just right so that we could hang the screen off the back, and in about ten minutes the entire setup was complete!

There were plastic chairs set up for about 50 people, but only a few moms and babies were running around when we got there. We started off with a prayer, some singing (which in Africa also means dancing!), and generally worshipping. It's pretty common to all dance around in a circle--how they pick the direction, I don't know!--and after a few times around the little ones pulled Abi and me into the circle. We both danced/clapped as best we could and tried to pick up the songs.

And then the film started.  It gets dark really early here (about 6:30pm), but it was a full moon... which made for a really cool setting for the crucifixion scene! Then Pastor Marc, a day volunteer who organizes the Jesus Film locations, paused the film with the shot of Jesus on the cross and began to share the gospel. He gave an invitation and 5 people came forward to pray with him. Then they were ushered into the church to talk with one of their pastors as we watched the rest of the movie.

Because we were situated right along a main road we had a lot of people walking home from the market or work stop and find a seat, stand off to the side, or simply pause for a moment before continuing on. A little family stood off in the shadows about 50 feet away and watched the film from the back side of the screen. I thought they'd stay for a few minutes, rest their weary feet, and put down the bundles they carried on their heads for a few moments... but when I looked back, the moms were crouched down, the children were playing in the dirt, and the men were leaning up against a pole--all comfy and totally into the film. Had they ever seen a movie before? They left as Pastor Marc gave the gospel, but at least a seed was planted...

It was different than I expected. I was kind of assuming I'd be in the back holding little ones, playing in the dirt with fussy children, or praying with someone through a translator. But no... Abi and I were sitting in the second row of plastic chairs watching the movie in Ewe (ay-a-way), the local dialect. All I could do was pray... which is always a good thing to do when sharing the gospel! :)

When the film finished, we packed up, the the church pastor invited us in for cold drinks. We helped to carry all the plastic chairs inside and then sat and talked for a little bit. It was so weird to hear them thanking us for bringing the gospel to them--all we did was bring a DVD, a projector, some speakers, and a glorified white sheet. But maybe it was more of a roundabout way of thanking God for bringing in 5 more children.

Here are a few pictures from the evening: 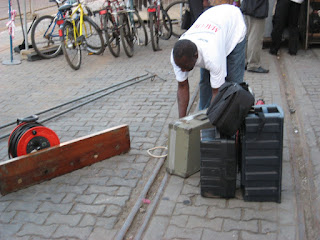 (packing up the sound system) 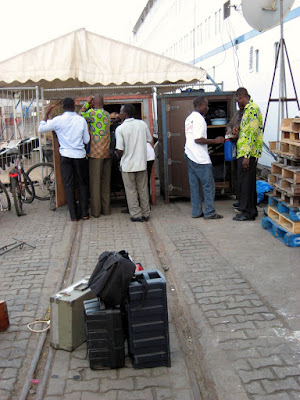 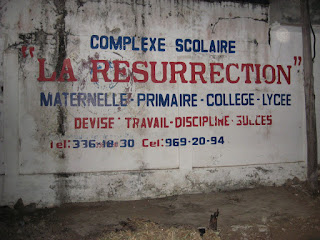 (the church we were at was also a small Christian school) 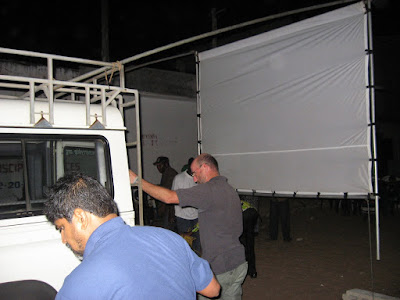 (the setup. The projector and sound equipment was in the back of the vehicle. The movie was
projected out the open back door and some of the speakers sat on top of the Land Rover)
*I've always wanted to be on one of those "Jesus Film evangelization teams... now I have been!*