Friday morning devotions in the International Lounge are for programs to report what they're doing and to tell specific patients' stories. Yesterday we heard about the Reconstruction Program--basically plastic surgery, skin grafts for burn patients, facial reconstruction, facial tumor removal, and muscle/skin contracture releases. Some of the pictures in her slide show were slightly graphic (and one of the nurses in the audience passed out halfway through!)... but that's what you see here in Africa.

Lessons Learned:
*if I want to be a PT in Africa, I'm gonna see a lot of wounds, blood, and nasty dressing changes. Maybe I can't fully forget about my acute PT observation experiences last summer!
*some of what Mercy Ships does is a matter of life and death... and a race against time!


Yesterday Caitlin and I made two types of mocha pecan cookies; we're starting to test recipes for a huge function on July 28th where there will be quite a few government officials and other NGO representatives. The hospitality galley is rather small and two is about the right number of cooks in that kitchen! We had tons of dishes to wash and as I dried and put them away I asked her about her plans when she got home, if there was a guy in her life, and if she ever thought about coming back to Mercy Ships. That started a great 45-minute long conversation in which she turned those same questions back on me. :)

Lessons Learned:
*if you want someone to ask you what's going on in your life... ask them first. Chances are, they're probably in the same boat as you. (OK, not literally!)
*wear an oven mitt when you're squeezing a pastry bag full of just-melted chocolate in an attempt to create fine drizzles of chocolate across the tops of the cookies. Little blisters all over your right hand really is not fun! 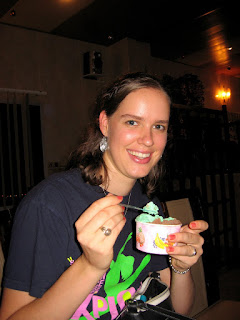 My roomies all wanted to go out for dinner last night before Julie S. and Silke fly out tonight. We met up with a group of 11 others who wanted to go out as well, but we didn't have a driver, no one knew where it was well enough to tell a taxi driver, and we didn't know if the Mercy Ships shuttle would run that far. After waiting on the dock for almost 40 minutes for the shuttle to come so we could ask the driver, 7 of us girls broke off from the rest of the group and started walking to the port main gate to catch a taxi. We get to the main gate and there is the shuttle waiting. We pile in, head to the restaurant, and see a group of Mercy Ships people at another table. :)

I was starved because I hadn't really eaten breakfast (it was homemade croissants and I really don't need that much butter!) or lunch because I was feeling pretty sick. I ordered a "pizza," the only thing on the menu that I could translate and semi-understand! :) It was OK, but the ice cream afterwards was pretty epic! One scoop each of menthe/chokolat (mint chocolate chip) and chokolat (chocolate).

We caught a taxi on the way back and crammed 4 of us in the back seat and 2 in the front passenger seat. :) The port doesn't allow taxis in, so we got off at the Seamen's Club just outside the port and some of the girls rode the Seamen's shuttle to the pier. Melissa and I stopped in and met up with a bunch of other crew who were there to play ping pong, sit outside and talk, the Germans to grab a beer, and just get off the ship!

I caught the shuttle back a while later and then sat in the dining room and ate a mango and chatted with the night nurses who were taking a coffee break. They were all talking about the side effects of all the different anti malaria meds, sticking people's AC veins with a 16-gauge needle to draw blood, and cutting up a 17 kilo (40 pounds) tumor so it could be incinerated. Ah... good stuff! I don't mind hearing about it and I really want to see some of the pictures. But I DO NOT LIKE IT IN PERSON!

Lessons Learned:
*make sure someone in your group can at least read a French menu.
*maybe all those blood vessels of the digestive system that I had to memorize was kind of worth it. At least I understood that when Allison (an OR nurse) talked about clamping off the omentum vessels that the patient had an abdominal/uterine tumor. :)
*taking Doxycycline long term is not a good idea. As a pretty strong antibiotic/anti malaria med it kills all your good GI bacteria... and with no fresh dairy on board it's almost impossible to get that bacteria back... hence my almost-constant low grade stomach ache and diarrhea. But here in Togo cerebral malaria is fairly prevalent... not the kind of malaria you want to take a chance of getting!