7 months ago, the Discovery Channel sent a film crew to Tenerife in the Canary Islands to start filming for a new season to air this fall. The crew was supposed to stay a few weeks, but loved their experience so much they got permission to sail with the Africa Mercy to Lome and film the first few days after arrival.

It was so neat to see people I live and work with every day featured as main characters in the episode! I finally got to see what the engine room and the bridge look like! (although I give ship tours, I've never been in those restricted areas) And I enjoyed the audience almost as much as the actual show; we were cracking up whenever they showed a deck hand walking through the hospital decks, the narrator made a huge deal about the pirate-watch training some of the crew recieved before the sail, and how normal parts of our lives are such a big deal to   a film crew! :) Such is life on a TV show!

The episode aired last week in Canada, but the season isn't even on the schedule for the US channel. :P I'll keep you posted! 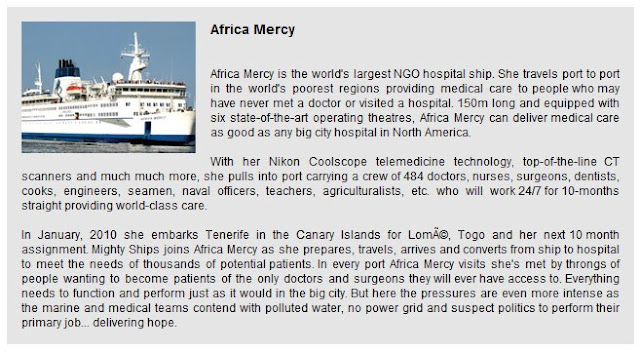