This weekend has been exciting... finally getting to do some of the things that others usually do on their first few days off... 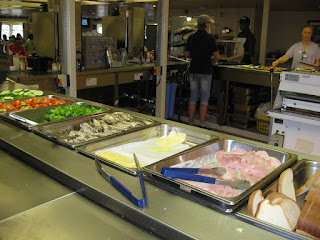 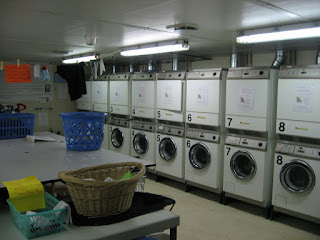 On Saturday, I still had the Duty Hostess pager, and got 2 early morning pages before I handed it off to Caitlin W. at 9am. Then, after a glorious breakfast of homemade French toast (eggs bought from the ship shop on Friday, bread from Saturday's breakfast I skipped, and milk from the boxes sitting in the crew galley), I got my laundry done, (I'm so glad I have 2+ weeks of clothes with me... doing laundry takes forever!) and then sat down to do some GRE studying... working my way through the analogies practice sections.
I went to Sarakowa after lunch with Gabriella, and we met up with a huge group of "Mercy Shippers" there. Sarakowa is a resort a few miles down the beach road and many of the crew go there for a nice sit by the pool, good food, and a place to relax/forget you're in Africa. It's usually 11,000F ($22) for a day pass, but we get a discount to 3,000F for a weekend day pass. I really enjoyed the bigger-than-Olympic-sized pool, and the clouds kept it about 80*, but it felt kind of strange to be there. IDK.
Last night--more GRE studying... this is going to take a lot more work... not fun... would appreciate your prayers!
This morning I went to church at Action Chapel with a group. We got there about 8:30am and left finally at almost noon. The service was different than I expected; there was very little dancing and most of the service was in English, then translated into French. There were about 300 people there. It was neat to see all of the men dressed in suits, pressed pants, shined shoes, and ties... the ladies mostly wore African dresses, and a few of the girls had a typical frilly dress like American little girls would wear. They really make a big deal about wearing your "Sunday best!"
Today, they celebrated Father's Day because last Saturday's heavy rains flooded the church building and few people showed up for the service. The message--given by the pastor's wife today--was all about the responsibilities of fathers to their wives, children, and colleagues. It was good to see the men treating to women well and valuing their wives... definitely not the usual here in Africa.
I will say that without the use of any electronics--excepting microphones and an electric piano--their service was the most "multimedia" I've ever seen! A drama about two fathers and the ways they treated their families; one good and one bad, a recitation of Isaiah 53 as one of the men reenacted Christ carrying the cross to Calvary, the choir singing an a cappella special song for the occasion, and the congregation row by row chanting and dancing up to the front to put their offerings in the basket... 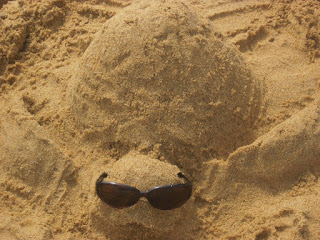 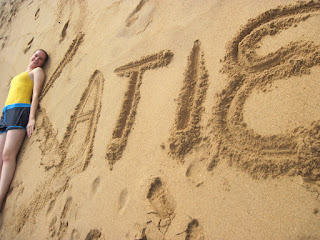 We got back to the ship a few minutes after noon and at 1pm I was on my way to Coco Beach with a group of short-term girls. This beach is behind a small resort and usually costs 1,000F to get in (that includes a Coke), but Mercy Ships crew gets in free. The beach was clean, the sand was glorious, and the barrier wall about 200' out from the beach broke the huge waves and created a riptide-free swimming area. Man, that water is salty!!! Oh, but it was so nice to swim out there... made me really miss my family's
days at Changi Sailing Club in Singapore! Then back to the resort restaurant for a dish of chocolate ice cream--that was amazing! Read a few more chapters of Pride & Prejudice, fell asleep in the sand, and woke up pretty sunburned... :-) Ah well... 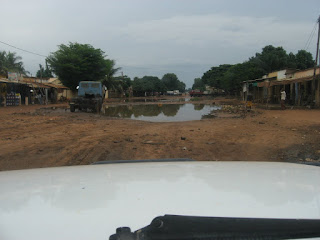 On the way back, our driver Eric wanted to show us "Mercy Ships Grocery Store," a local mini mart that the owner named after us. :-) After about 15 minutes of driving we reached some 3' deep puddles in the road. The Land Rover we were in was not specially equipped for deeper waters, so we had to turn back before we reached the store. :( But on the way home we passed "Jesus Christ is Lord Tire Rotation," "El-Shaddai Coiffure (hairdresser," and I've heard of the "Blessings Bar." 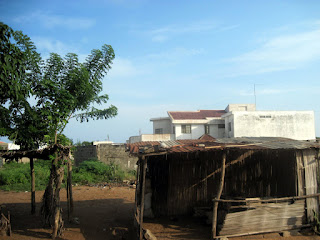 We were rumbling down a very bumpy road (by bumpy I mean you bounce off the seat with each rut and the road looks like a mogul court in dirt instead of snow. There is no possible way to evade the puddles, pot holes, and ruts... thank goodness for Land Rovers) when we passed a man rolling a Fan Milk cart. These guys are the African equivalent of the ice cream man. We stopped in the middle of the road, one of the girls leaned out of her window and whistled at the guy who came running over with his cart. For 50F we each got a packet of  vanilla ice cream. To eat this amazingly-delicious treat you have to bite off the corner of the plastic package, then squeeze/suck out the ice cream--like you'd eat a ice pop. 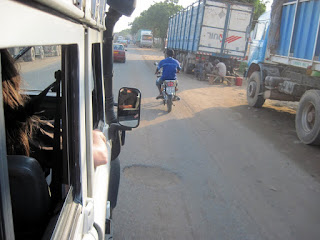 We got stuck behind a huge line of trucks just before we entered the port and one of the local young men swung up on the ladder on the back of the Land Rover. He just wanted to hitch a free ride for a few kilometers... but thankfully Eric leaned out of his window and shouted at him, "Hey man! Get off!"... and he did. :-) 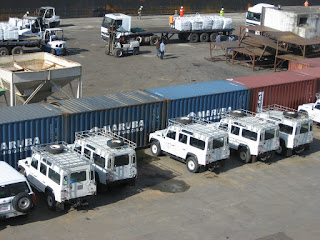 Then back to the ship--lasagna and rice pudding tonight. That shower was amazing... who likes that sandy feeling? :)
Tomorrow, work starts bright at early at 8am... oh boy... here's to the next 7 days of work (I'm on duty all next weekend).

*I will always be a Toyota fan, but I think Land Rover is my new favorite... they'll get you out of anything*