This past weekend has been quite a weekend to remember! Early this week Abi asked if I wanted to go back to Kpalime with her and hike Mt. Agou, the highest place in Togo. I said sure, but we didn't make concrete plans knowing that even the best laid plans usually don't work out. After all, TIA. (This is Africa)

We had been thinking about leaving Friday evening after I got off work, but we decided to wait until Saturday morning. At breakfast we each packed several PB sandwiches and made sure everyone was ready. The group: Scott, Aleah, Rachel, Abi, and me. We met Emmanuel, a day volunteer who worked as a translator in the hospital, at the port gate and then caught a taxi further into Lome. 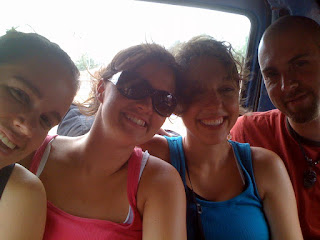 From there, the 6 of us (and 7 others) piled into an 8-passenger van for the drive to Kpalime. I was so happy to get out finally and stretch my legs! We were dropped off outside the Hotel le Geyser, and from there Abi led us to Jeff's house. Jeff is a good friend of Josh, another Mercy Ships crew member that Abi and I met in January when we went to the Introduction to Mercy Ships conference. Jeff routinely takes groups of people up to Mt. Agou, and Abi met him when she was last in Kpalime.

At about 1:30pm we finally left for the foot of Mt. Agou. Then we started walking up the paved road while Jeff explained that we could take the road all the way up (12km) or we could take the "shortcuts" that cut straight up the mountain and through the many little villages built into its side. We opted for the shortcut... 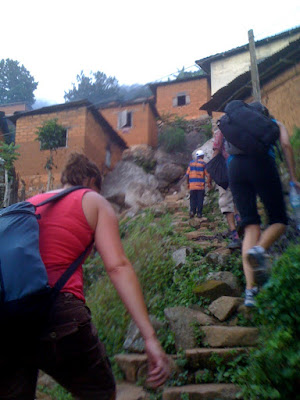 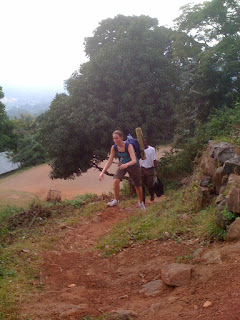 ...which turned out to be about a 3-hr workout on a stair climbing machine. Try hiking/scrambling up the side of a mountain on wet/mossy stones that create steps about 1' tall. (think Gollum from Lord of the Rings and you've got a good pic of what I must have looked like!) I had a tough time in there... I made it all the way and I tried to not complain, but I had to rest fairly often.... grrrr.... that made me mad. Especially since my backpack probably only weighed about 20 lbs and Scott was carrying the entire 3-man tent in his pack! Mt. Agou has an elevation of 986m (3,234ft) and I doubt that the foot of the mountain was too far above sea level, but I don't know exactly how much elevation we covered. :)

The view from about halfway up. The haze is partially fog due to how moist the air is and partially because of all the cooking fires. 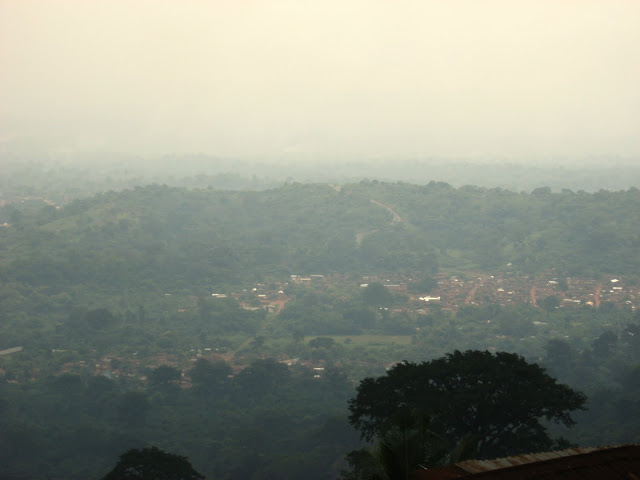 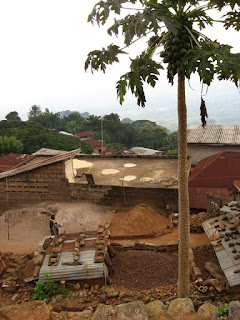 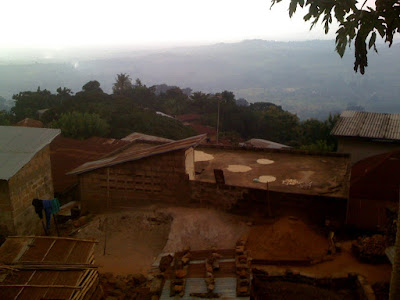 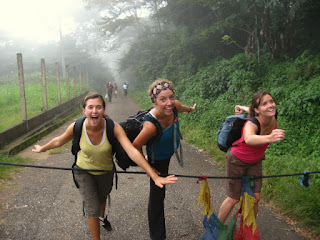 We finally got to the top and stopped at the security/army post there. Jeff and Emmanuel talked with the main guard for almost an hour as the 5 of us broke out the cookies, PB sandwiches, and ate our first sugar cane. (aka the walking sticks that Emmanuel and Jeff had picked up in the last village) 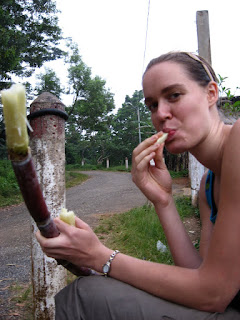 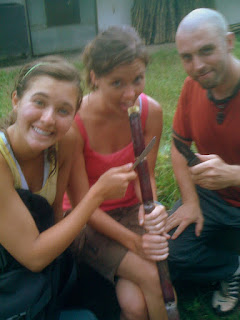 And after all of the discussions the guard told us that because we didn't have the necessary permit we could not spend the night on the mountaintop--and he wasn't interested in a few thousand CFA to let us through. But in the hour of discussion the sun had started to set. We packed up and started our trek down the mountain via the road. At some point Jeff and I started walking faster than the others and we walked by the light of my little keychain flashlight powered by 1 AAA battery. :) He and I got down in 2 hours--but the last 45 minutes were pretty much sheer torture because my wonderful tennis shoes decided that they hated me and thought they should get their revenge on my feet. But all those blisters did was convince me to leave the shoes here in Africa so I can bring the rest of my souvenirs and stuff home!

Jeff teaches English at a secondary school in Kpalime. He's never been anywhere outside of Ghana, Togo, and Benin, but he is an avid reader and has made many friends from around the world. He knew quite a bit about the States and we had a wonderful conversation as we trudged along in the dark.  I kept having to remind myself to talk slower and use simpler words and ask if he knew what certain words meant, but his English is quite good! He told me about his children; Leah, Christian, Emerald, and Onyx, and his wife Shalom. (His surname means "stone" so his last two children's names are perfect!) 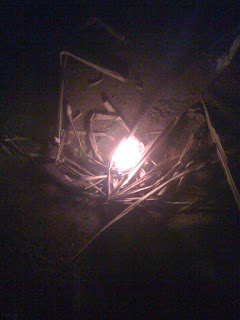 We arrived back at the main road and sat down to wait for Abi, Aleah, Scott, Rachel, and Emmanuel. A while later a taxi driver stopped to ask if we needed a ride. We told him we were waiting for our friends and asked if he would drive up the road and pick them up. We did so, and about 15 minutes later he returned with them all--they'd paused for a rest and made a mini campfire in a pothole on the road.(thanks to Abi's iPhone for the pic!) :) We packed 8 of us into the taxi--a regular-sized sedan that's meant for 4 passengers but often holds many more!

He dropped us off back at the Hotel le Geyser, and that's when Aleah noticed that her flipflops were missing out of her backpack. That led to a search throughout the back of the taxi before we finally agreed that Kojo must have stolen them--we have no idea who took them/if they fell out/when someone could have opened her backpack and taken them. Oh well.

We ate supper at the hotel's restaurant. Their omelette sandwich for 1,000 CFA was a pretty good steal! And I'm officially addicted to Fanta orange soda again... remember, Mom? The hotel didn't have any rooms (there went plan B), but Jeff offered to let us stay at his home which is just behind the hotel. 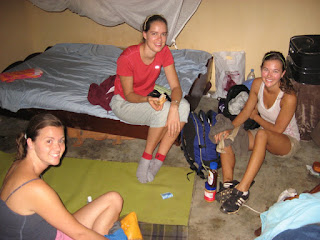 We traipsed back to his house and collapsed. Abi and I got the bed, the other girls got the floor with their air mattress and yoga mat, and Jeff and Emmanuel staked out the tent on the front porch. We joked that since Scott carried that heavy tent up and down Mt. Agou he HAD to at least put it up! :) 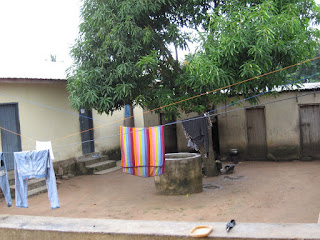 We woke up this morning, had PB and honey sandwiches (thanks to Abi's stash), said goodbye to Shalom, and went back to the hotel to get a drink and use their restrooms. Jeff and Onyx came to say goodbye and then we caught rides to the "bus station." We had to get Fan Milk (ice cream in a sealed bag. Super good. And only 150 CFA/~$0.30)  from the guy on the bicycle before all piling into another taxi for the 3-hour ride back to Lome. 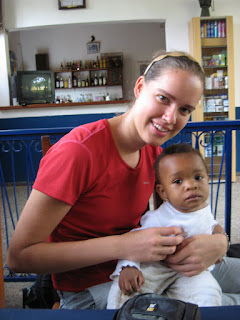 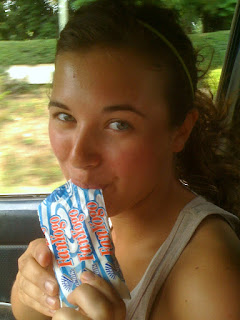 It took FOREVER to get home! I don't know how fast we were going (speedometer was broken... a common occurrence in Africa), but since the taxi was probably 15 years old and stuck with 37,000km on the odometer, we didn't expect much from it! But we got back to Lome safe and sound.

First stop: dining room for cold lemonade. Then a shower. Then unpack the backpack and throw everything in the laundry. Then up to Deck 8 to finish a book and relax. Then dinner ("man cannot live on PB sandwiches for an entire weekend"). Then IMing with friends and watching NASCAR up in the Midships lounge. Then BED!!!!

This weekend was so much fun and I'm so excited that I finally got to do stuff the real-African way. I'm super sore from the hike and I'm not looking forward to work tomorrow with the blisters on my feet, but such is life! 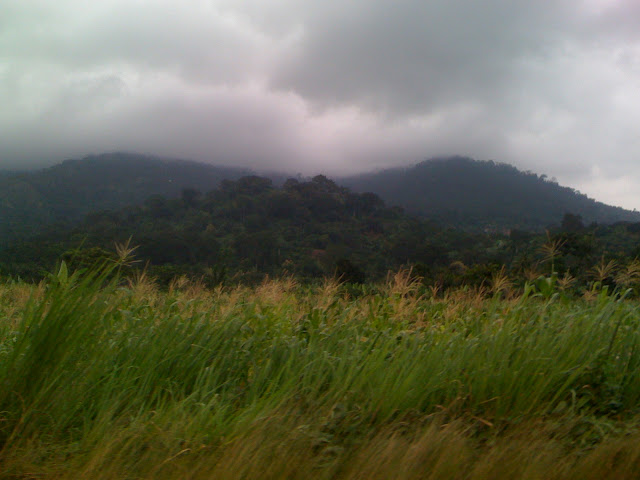 *I climbed the highest point in Togo!*