After eating yummy cinnamon buns on Wednesday morning, we loaded up into the car, strapped our bags on top, and drove about three hours to the SIM hospital in Danja, Niger.
After settling in, one of the missionary families took Dad and I on a walk through the fields surrounding the hospital. The SIM property is quite extensive, so much of it is farmed by locals, similar to sharecropping. The original idea was to bird-watch, but our friends also pointed out some interesting plants and trees along the way. 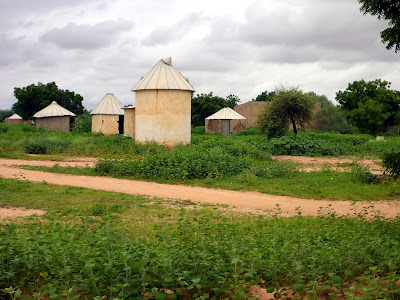 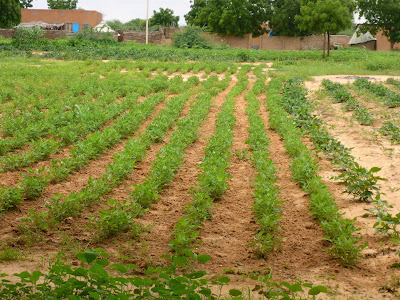 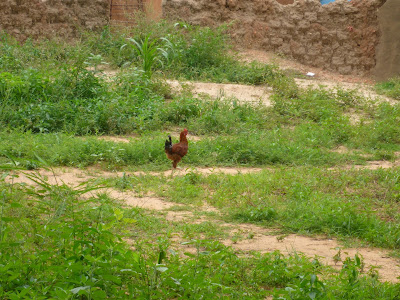 On Thursday morning, we started off the morning by joining in with staff devotions in the Danja Fistula Center. It was in Hausa, and then the director gave some announcements in French, but one of the nursing staff kindly translated for us!
Afterwards, we had a tour of the fistula center and of the rest of the hospital. 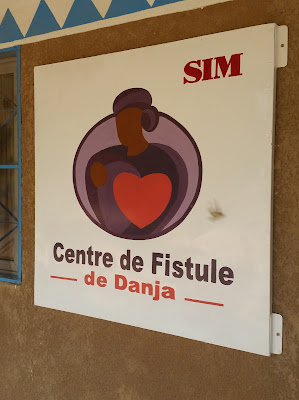 Like many mission or NGO hospitals, there's a focus on maternal and infant care. Here, the infant clinic will distribute "Plumpy Nut" to infants and children who are severely malnourished. It requires no mixing and is shelf-stable; all the mama has to do is tear off a corner of the packaging and the paste can be squeezed out, perhaps by the child himself while he is on his mama's back. Plumpy Nut is made out of peanuts and fortified with other nutrients. 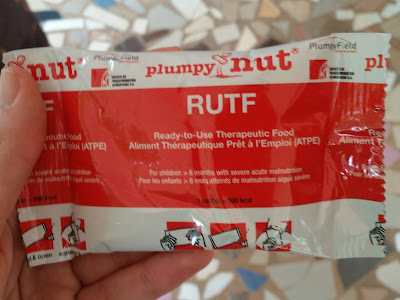 After our hospital tour, the director's wife took us to the fistula village out back. Here, the women will live for about three months while learning to do embroidery and knitting, some basic school lessons, and have the opportunity to partake in a 3x/wk exercise class. The ladies were gracious to show us the embroidered baby wrappers (fabric lengths about 2m long used to tie babies onto a mama's back) they were making to sell. Gina, the missionary psychologist also spends time with these women sharing Bible stories and doing group counselling/trauma support. 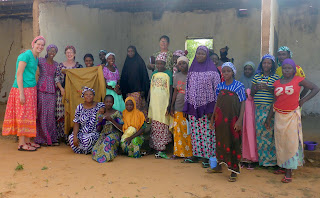 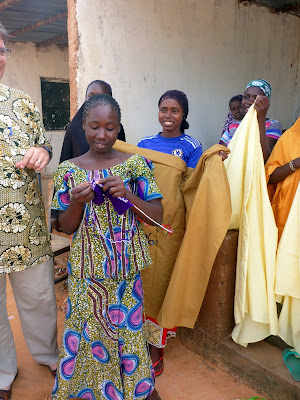 I was able to sit in on the group exercise class that Esther runs. Esther is a Nigerien nurse who received some therapy training from the missionary PT who was just there, and she helps out the Nigerien PT who is over in the hospital. The women have a program focused on core and leg strengthening, and many of them knew it entirely by heart! I was encouraged to see exercises like bridges, heel raises, clamshells, and quadruped leg extensions. 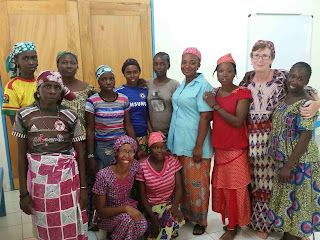 In the afternoon, Dad and I had some time to rest at the beautiful guesthouse. We brought our plastic chairs out into the breezeway and enjoyed a cup of tea. We also watched the butterflies and the neighbor's chicken scratching in the guesthouse courtyard. 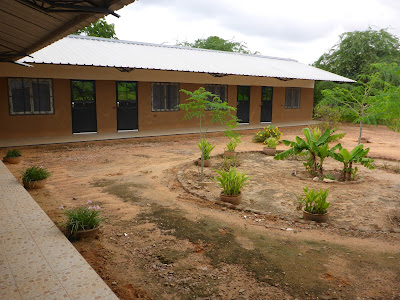 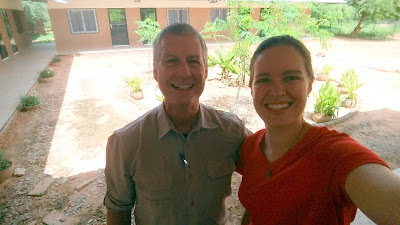 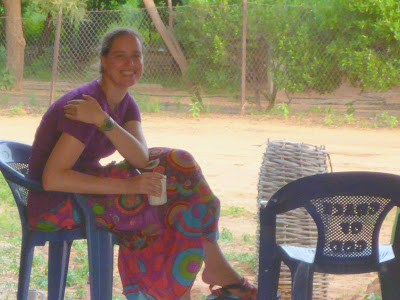 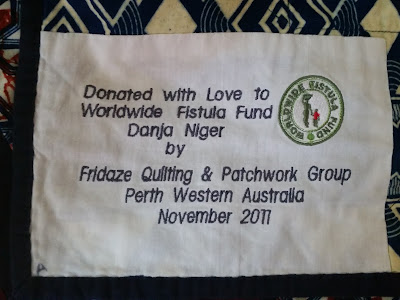 On Friday, we were able to meet Dr. Intengre, the fistula surgeon. The center is just a few years old and was funded largely by Worldwide Fistula Fund, so there is a lot of potential there! I returned to the exercise class, and this time Esther asked me to show some more exercises. I decided it was easier to advance some of the exercises they were already used to doing than to teach new ones, especially because my knowledge of French matched Esther's knowledge of English!

We ate lunch with the director at the hospital canteen. You never know what's going to be on the menu for the day. We were blessed to have "rice and sauce" and a soda for about $2/person. The sauce was made from moringa leaf (a vitamin & mineral-rich plant that's grown in West Africa) and seemed to be mixed with tomato, but I didn't ask. Like Dad says, "if it was good, don't ask what it was!" 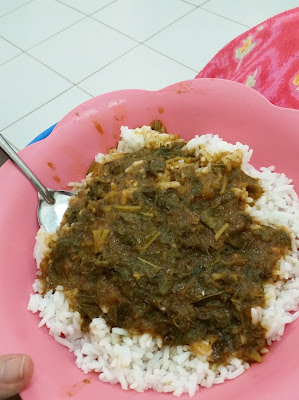 In the afternoon, I went out to the fistula village with Gina as she used Bible flipcharts to tell the story of creation, how sin entered the world, and why Jesus' death erased the punishment for our sin. She'd told pieces of the story before, so some of the women volunteered here and there to help her re-tell it. I sat on the ground with the other women under their tin shelter and when I pulled out my own knitting project, I think I made about 20 new friends!

I also spent some time with Samalia, the PT who treats all the leprosy, surgical, and orthopedic cases. He is a recent graduate of a PT program in Niger, and he had lots of questions to ask me. I wrote down a few exercise suggestions to better help him treat low back pain (it seems like that's a tough diagnosis for any new PT around the world!) and worked with Esther to develop an advanced set of exercises for her class. I decided to draw the exercises out with stick people so she wouldn't have to try to translate my written description—we both laughed at my horrible drawing skills.
Samalia and I talked through appropriate use of modalities like heat/ice/diathermy (I'd never actually seen a diathermy unit before!), then he and Esther helped me start a list of helpful words and phrases in English, Hausa, and French. We exchanged email addresses and I look forward to corresponding with him as he grows in his clinical skills and I learn how to treat conditions far more advanced than usually seen in America.

On Saturday, we had a few hours to enjoy a cup of tea and both Dad and I to finish our books, then it was time to drive to the airport in Maradi. We met Ian again and loaded up for an hour-long ride to Galmi. There we picked up another passenger, and then flew back to Niamey. 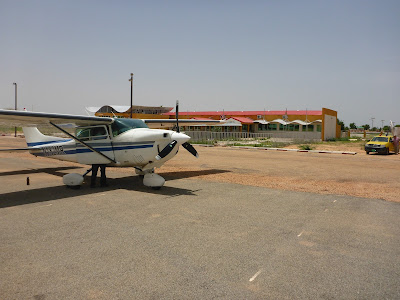 We were taken to the home of the SIM Niger Director. We chatted for a few hours, then they took us out to a lovely restaurant for dinner. We got back to their home about 930pm and Dad and I had to be up at midnight! Our taxi driver came for us at 1230am and took us to the airport in time for our 3am flight.

We took quite a circuitous route back home—we went through Casblanca, Morocco; Madrid, Spain; and Miami, Florida! During our layover in Madrid we found a Starbucks and a duty free shop selling Kinder Eggs!
We arrived home on Sunday, the same day we left Niger—time zones are weird things—and Mom met us at the airport with chocolate and a few of our favorite foods!

All in all, Dad and I had a great trip and enjoyed meeting everyone, seeing the facilities, and hearing about the work God is doing through SIM in Niger and Nigeria.

I remember Dad asking me one day as we were sitting at the Danja guesthouse drinking tea, "So, do you know where you're going to go?" I told him my thoughts, and he agreed with me. God couldn't have been more clear! So, where am I going? Well, you'll just have to wait and read the next post!