To read about the first part of my trip, click here.

After leaving on Jos, Nigeria, our next stop was Galmi, Niger! We flew through Togo and Burkina Faso on the way to Niger's capital city of Niamey where we stayed overnight at the SIM guesthouse. One of my friends from college has an older sister who is a missionary in Niger with her family, so we were able to reconnect with them and have dinner at their home.
The next day (Saturday) was rainy, but it turned out to be a perfect day for flying! Ian, the SIMAir pilot took us back to the airport where he filed his flight plan, then we went out to the SIMAir hangar. Instead of driving 7 hours to Galmi, took a 2.5 hr ride in a 4-seater plane from the Niamey airport directly to the dirt runway at the SIM hospital! I enjoyed looking out the window and taking photos while Dad had fun talking on the headset with Ian, our pilot. 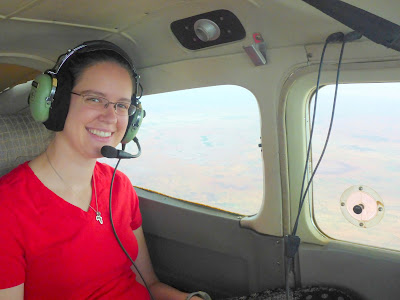 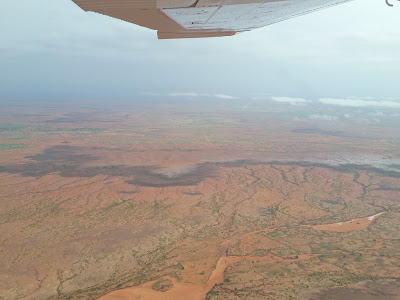 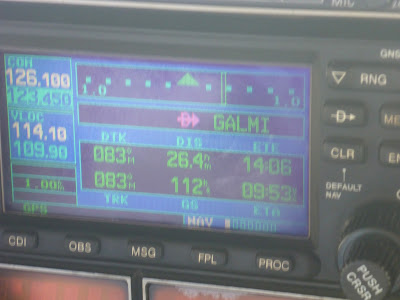 I shot this 7-minute video of our final descent and landing at Galmi. At the 3:50 minute mark you can see the entire hospital and town laid out along the N-1 road.

We were met by a welcoming committee of missionaries, their children, and a few "missionary dogs!" SIMAir regularly flies in and out of Galmi bringing supplies, mail, and short term missionaries, so everyone looks forward to watching the plane come in! 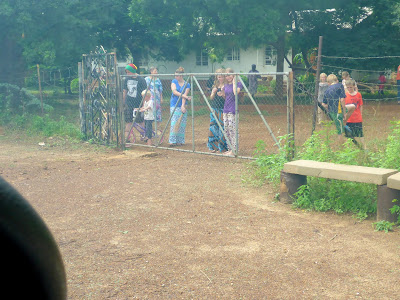 Saturday afternoon we had lunch with Deb and her husband James, and then met Heidi, the pilot's daughter who is interested in pursuing therapy after highschool and had come to shadow Deb for a few days. I had met Deb at the Global Missions Health Conference last November, so it was fun to see her again! She took us on a tour of the whole hospital and then showed us the therapy clinic. I loved seeing the anatomy charts, stationary bike, gym balls, and the closet full of pediatric therapy toys that are found in any therapy clinic around the world! 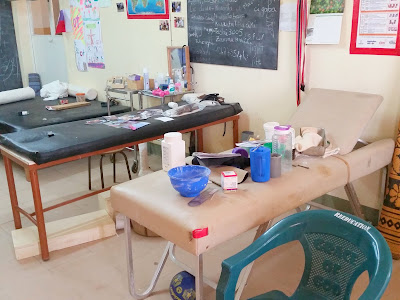 I also met Lisa, a family medicine physician who is serving at Galmi for a couple of weeks. Turns out we're both alumnae from UT Southwestern Medical Center!
Saturday night we joined with the rest of the missionary community for dinner at Picnic Rocks, a place just a mile or so out of town where you can get a great view of the surrounding area. We had dinner with a family originally from Singapore, so we laughed about things we miss in Singapore and even slipped back into "Singlish." Once the sun went down, we enjoyed stargazing before heading back to the compound.
On Sunday, we went to church with Steven and Carol, the directors at Galmi hospital. The service was nearly four hours long, in a mix of French and Hausa. I could follow along with a few of the hymns that were in my Hausa hymnal and switched back and forth between Hausa and English Bibles during the sermon. 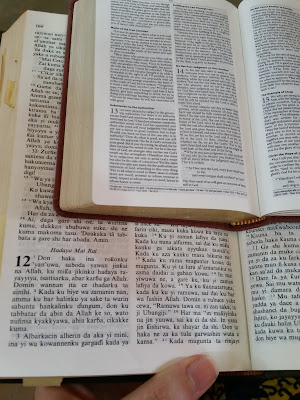 Monday and Tuesday I went with Deb to the therapy clinic. Deb is an American-trained occupational therapist, but has picked up quite a lot of physical therapy skills by necessity. She has also trained one of the nurses in some therapy skills, so he sees patients on the hospital wards while Deb works mostly in the clinic. I was able to assist Deb with a few therapy evaluations, tried to mime and gesture my way through teaching an adult how to use crutches, and we worked together on a few toddlers with developmental delay.
Monday afternoon is when the clinic does its weekly club foot clinic. There they use the Ponsetti method of serial casting to correct the position of the foot while the baby is still young. It's something that can be quite effective if started early enough and if the mama will bring her baby back each week for a new cast, then be compliant with the adaptive shoes during "naps and nights" until the child is walking. It's always hard to pin down a squirming baby in order to correctly wrap their entire leg in a plaster cast—good thing plaster hardens quickly!
After we were done in the clinic for the day, Deb took us to the market in Galmi, as well as on a few of the dirt roads to visit some of her former patients. We stopped by to talk with some of the older retired men in Galmi and Dad asked for a picture with all of them; I think he could fit right in with these men and solve world hunger over a cup of tea! 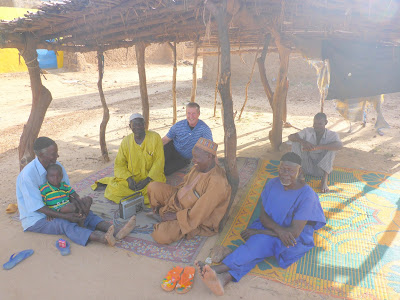 On the way back to the hospital compound, Deb helped us buy a chicken fresh off the grill for 2500cfa (or about $5 USD) as well as some oranges (which have a green peel) and these amazing fried cakes that are made out of bean flour (what Nigeriens call beans we would call black eyed peas).

Tuesday morning started off quite slow, so we did a bit of organization in the therapy clinic. For those of you who have been around therapy clinics, you know there's always that one supply room that's crammed full of stuff that you might need one day!

Deb has been given a number of adaptive shoes for club feet, compression garments for burns, and supplies for making her own splints and slings, and she showed us some of the locally made adaptive shoes and splints. Last year she'd taken a lace-up cast shoe (worn to protect the plaster on the sole of the cast from breaking down while walking on it) to a local shoemaker to see if he could replicate it. He said, "No problem! I make shoes like that all the time for camel hooves!"

I enjoyed playing with a five year-old boy who was in the hospital to get a skin release following some severe burns. It was fun to see him smile when the matchbox cars came out! Deb shared with me that toy cars are a hit with both boys and girls; girls are so used to being around real babies that dolls that don't move and cry can be confusing and even scary!

About 30 minutes before the clinic was to close for lunch and midday rest, six patients showed up! I did an eval on a teenage girl and decided she needed a referral for a hip x-ray, we did some therapy for a young toddler who still isn't sitting up, and set up some patients to come back later in the week.

After midday break, Deb and I decided the rain looked like it would hold off long enough for her to take me on a walk through the millet fields out behind the hospital to visit a couple villages. We set off with our cameras and water bottles and traipsed through flooded fields and along muddy cow paths to see what life as a Nigerien farmer looks like. 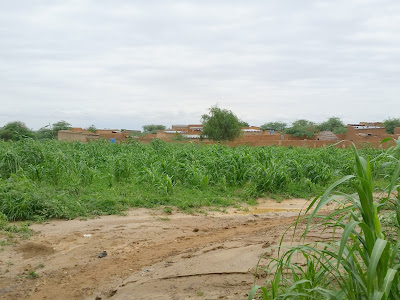 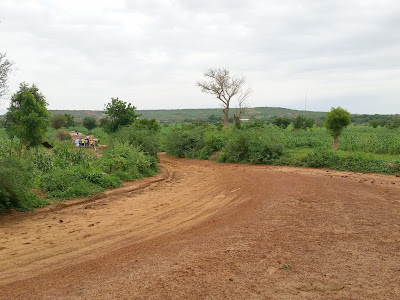 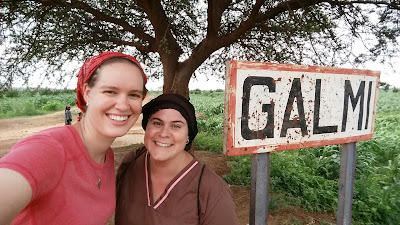 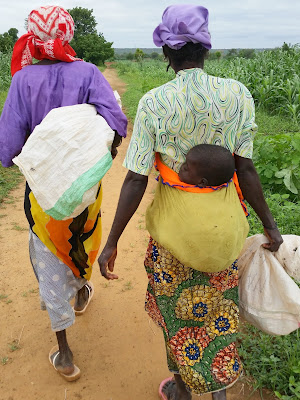 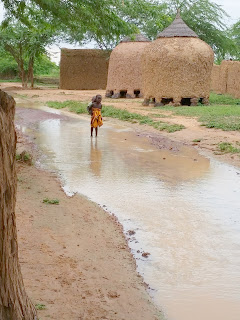 Galmi is well-known for its purple onions. (You can even buy Galmi onion seeds here!). Farmers plant millet, beans, and onions for their own use, then plant onions to sell for profit to wholesalers. Local children will use dried grasses to weave basket structures which will later be stitched onto the top of the sack. Eventually, the sacks will be piled high onto trucks to be taken to Nigeria or wherever they'll eventually be sold to the consumer.
While Deb and I were traipsing around the millet fields of Niger and saving the world one therapy patient at a time, Dad was spending time with the leadership team of the hospital. What started off as a conversation with the director over Sunday lunch turned into two days of meetings! Dad was able to use his executive coaching and strategic planning skills to facilitate some discussions regarding the hospital's mission and vision. He and I were both praying we'd be able to encourage the staff at each place we went, and this was one way God answered our prayers!

Wednesday Dad and I hitched a ride with a missionary family back to the SIM hospital in Danja, Niger which is about three hours away. However, we were strictly told, "You can't leave before cinnamon buns!" This Wednesday morning tradition is a gathering time for all the missionaries, and they were sure to set aside a few buns for Ian and those coming in on the SIMAir flight!

We watched the plane take off, said goodbye to all of our new friends at Galmi, and then it was time to pile into the car for the drive to Danja!
And just to show that Dad and I were still having fun...