Yams are a big deal here. Like really big. If you ask a Nigerian what his/her favorite food is, they're likely to say pounded yam. In the market, there are men pushing carts or wheelbarrows of yams for sale.
When Americans think of yams, we usually think of the sweet potato with the orange flesh inside that is often used for sweet potato casserole around Thanksgiving time. Here, yams are these oblong, almost hairy things with a white inside. The women will peel it, cut it into chunks and boil it, then pound it until it's a slightly-sticky ball that looks similar to bread dough. The pounded yam is usually served with some sort of soup or stew and it's all eaten with the hands. I've had yam and several of the Nigerian soups in the month I've been here. It's nice, but I wouldn't say it's my favorite food...yet!

I have a yam sitting on my kitchen table. 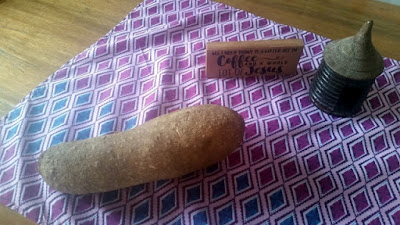 There's a story behind the yam.

Well, to tell it properly, I have to go back to this past Tuesday at Evangel VVF Center. A woman came to the clinic thinking she had fistula, as she had urinary leakage following her last pregnancy and delivery. We were able to confirm in the clinic that she did not have fistula, but instead had symptoms of stress urinary incontinence--exactly what I specialize in. How glad we were that we could now offer her treatment! The physician running the clinic asked her to return on Thursday morning as I would be running my clinic that afternoon. I'm finding that it's common to tell patients to arrive two days before their surgery to ensure that they actually show up in time to be admitted and prepped, and like this woman, they may be told to come in the morning when they won't actually be seen until the afternoon.

One of the staff members is a young lady with an equivalent of CNA/Patient Care Tech training, and she plans to attend nursing school in the future. She's agreed to delay her training for a year to help me with my medical Hausa and assist me in my physio clinic (here, as in most formerly-British countries, PTs are called "physiotherapists" or simply "physios.") Praise the Lord! She and I planned to see this patient on Thursday afternoon after the surgical cases were over and she was finished with her patient care responsibilities.

So on Thursday, I spent the morning observing in the operating room (or "operating theatre" as it's called here). My assistant/translator was supposed to be free at 4pm, but because of some long cases in the operating room, it wasn't until about 4:45 that we were both free and I'd found some exam gloves! I was starting to have a migraine, probably from dehydration, skipping lunch, and the incinerator burning about 100ft from the VVF center, and I was really looking forward to going home for the day. But this lady had been patiently waiting.

I walked up to her and said, "Sannu, ki yi hakuri na yi latti." (I'll make you translate that here: www.translate.google.com). Forty-five minutes later, after I'd finished the exam and had given her some recommendations and exercises to do at home, all three of us were smiling. The lady was relieved to know that she didn't need surgery or medicine, that she wasn't going to make it worse, and she could have sex/a baby. She allowed me to pray for her (in English, but hopefully in Hausa soon!), and she went on her way.

I called my keke driver to come pick me up as soon as he was back on this side of the city, changed out of scrubs, grabbed my bag, and walked down the steps of the VVF Center. There are always a few women sitting on the front steps waiting to be seen in clinic, doing laundry or cooking for their family members who might be VVF patients, or post-op patients waiting to be discharged. Many would rather sit outside than in the ward. I greeted a group of three older women who were at the bottom of the steps, and they answered with a string of Hausa that I couldn't decipher. But I did manage to catch "Mun gode likita" (We thank you doctor.) Then one of the ladies reached into the bag at her feet, pulled out the yam and handed it to me. I replied "Na gode mama," and reached for some Naira bills to hand her. She shook her head and waved goodbye.

All care at Evangel VVF Center is provided free of charge. The women who come here may have spent quite a lot of money at other fistula centers for prior surgeries, or they may come from tiny villages where they farm small subsistence plots and never have enough money to go around. Here, they're fed and cared for as long as they're here, and all nursing care, surgical expenses, and medications are provided completely free. Occasionally, a woman will bring a small gift with her, maybe a chicken or some produce, but many women have spent their last dime trying to get to the hospital. This center survives on generous donations from individuals and on grants from organizations dedicated to treating fistula.

I don't know who this older lady was. Maybe we'd seen her in clinic that Tuesday. Maybe she'd seen me around the VVF center. Maybe she was accompanying someone who'd had surgery that day. Maybe she didn't know that I was only a PT and not a surgeon or a financial donor. Maybe she was just grateful and wanted to share what little she had.

So I walked out of the hospital complex with a full heart, my bag containing dirty scrubs and an uneaten lunch in one hand, and this precious gift of a yam in the other hand.