You know how Jewish families always say each Passover, "next year in Jerusalem?" There's something about embracing where they were at the moment and celebrating the important event, but in the back of their minds wishing to be in their homeland, thousands of miles away. Something about wishing things were the way they should be. Wishing they could celebrate the way Passover should be celebrated.

See, it's kind of that way with me and Starbucks... no, really! Besides my lovely local green goddess of coffee providers, I've been in Starbucks in Singapore, Malaysia as well as the Tokyo, Singapore, Kuala Lumpur, Washington Dulles, DFW, and Albuquerque airports. This summer I will add the Paris airport to the list, as well as the only Starbucks in the continent of Africa--the one aboard the Africa Mercy. 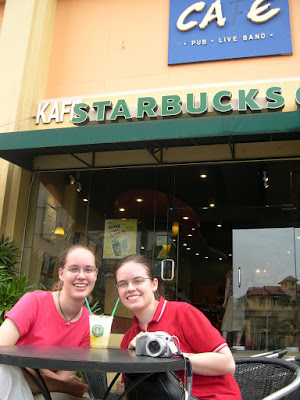 There's something about walking into any Starbucks and being able to order a "tall extra-hot cinnamon dulce whole milk decaf latte" and having it taste the same as it does here in Tyler, TX. Who cares if I understand the exchange rate and know how much I'm paying... it's gonna taste the same anywhere in the world.

Coffee brings people together... late-night talks with college friends, early morning cramming before a test, catching up with an old friend sitting out on Starbuck's patio, a safe place for a potentially awkward conversation with a guy friend, a place to study with a new friend from class, and a great stop after dinner before the movie.

But next time, let's grab a cuppa' joe in Africa... my treat.