Ok, so up until now we'd been your typical tourists, shopping and seeing all the cultural sights. But seriously, it was nice to get out of my city and see something else, and it was amazing to be in a place where I could eat really good food, and I could actually go shopping for something besides my daily necessities!

We were partnering with the large ECWA church in Kano to do a medical and evangelistic outreach to a rural village. About 50 people in the congregation went out on Friday afternoon to spread the word, show the Jesus film, and share the gospel. Our team of ten drove out there early Saturday morning to join them. It was a rough 2 hour drive as the last 45 minutes were over dirt paths that were more suited to motorcycles and cattle than our minivan and the pastor's sedan! 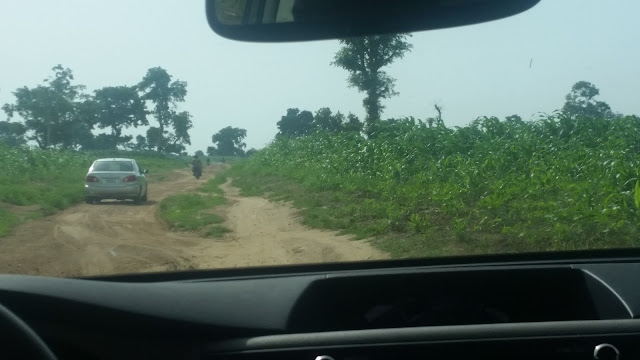 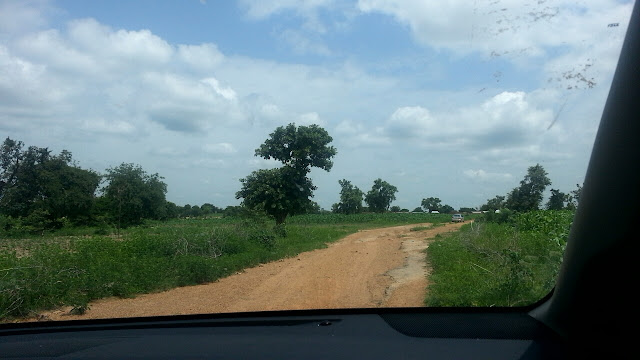 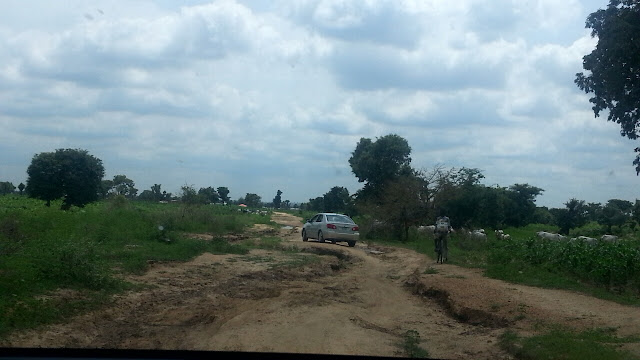 When we arrived, the church volunteers had already been going for about an hour. There were people lined up waiting to be seen, teams of medical personnel doing screenings under umbrellas or the shade of the few trees, and others sitting with people to pray and provide counselling. 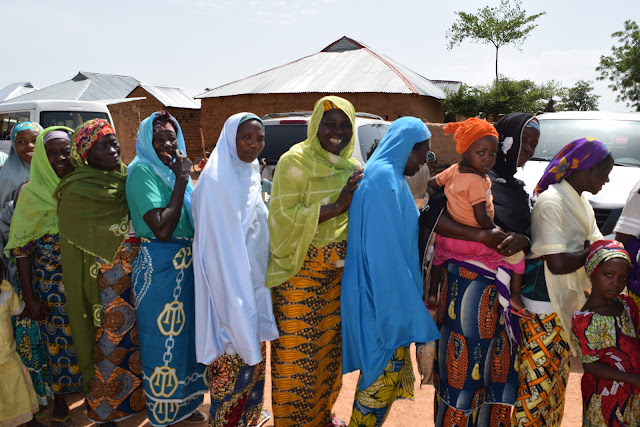 I had already decided that I would work with the children instead of as a physical therapist. My previous medical missions trip to Haiti where we did a similar village outreach had taught me that I would really struggle without a dedicated translator, that the fast-paced setting of a one-day outreach isn't conducive to providing detailed patient education, and there's really not much I can do for the ones who come for "back ache for the last 15 years." The limited medical benefit I could provide was not worth the frustration! But kids... now that's something I can do!

When a few of us walked around the back of the church, we heard the kids singing in English "Read your Bible pray every day if you want to grow..." I joined in the singing, complete with all the hand motions that I learned in Good News Club over twenty years ago!

The children's leader was just finishing up the program that he'd prepared, so we assisted in passing out packaged biscuits (cookies) and sweets (candy). 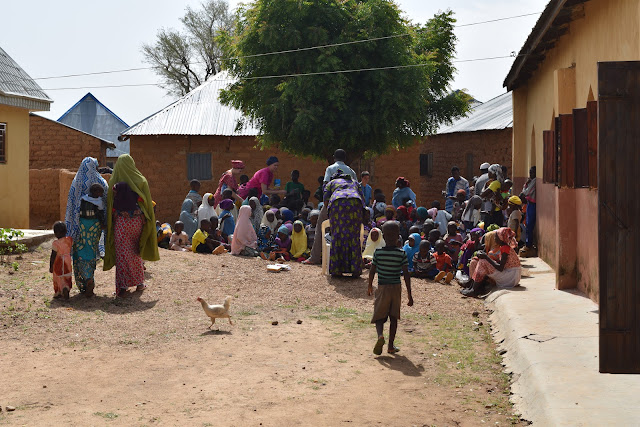 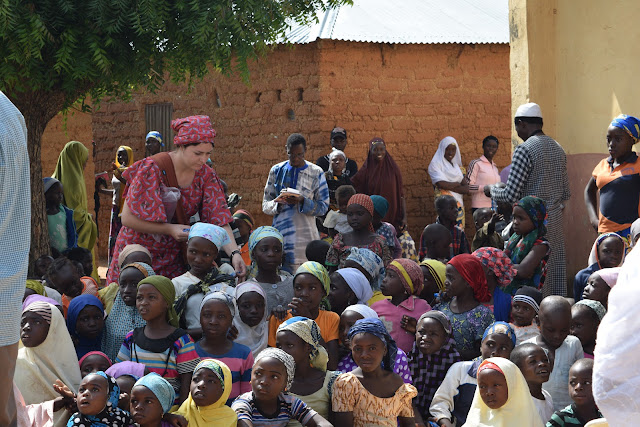 Then J___ and I started to teach the kids a hand-clapping game. Usually, we'd sing a song and whoever was last clapped when the song runs out is "out" and the circle gets smaller and smaller until there's one winner. But, we didn't know any simple songs in Hausa, the children didn't know their right hands from their left so we had to go around and place each kids' hand correctly to keep the clap going, and we wanted all the kids to be able to participate. We just decided to count aloud to 10 in Hausa and whoever was last clapped had to exchange places with one of the kids outside the circle. 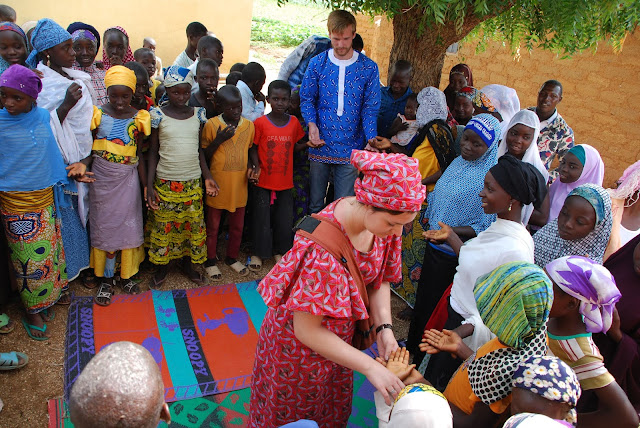 Later, the circle widened to include almost forty kids and we just clapped around and around, not caring who was "in" or "out." I tried to get a couple different waves of claps going around the circle, but that was too confusing! 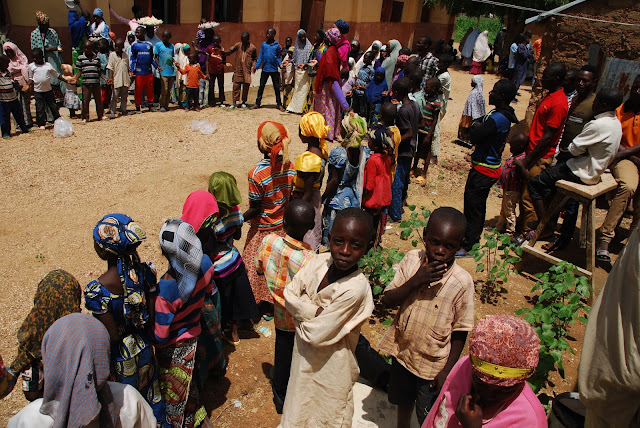 That game lasted for almost thirty minutes before kids got bored. We then tried to teach the them how to do the "human knot" where you have to untangle yourselves without letting go of your hands. That didn't go over so well, and J__ and I had to personally guide each little group. 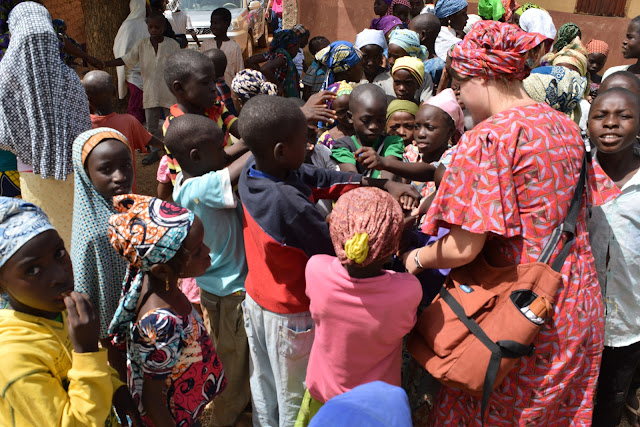 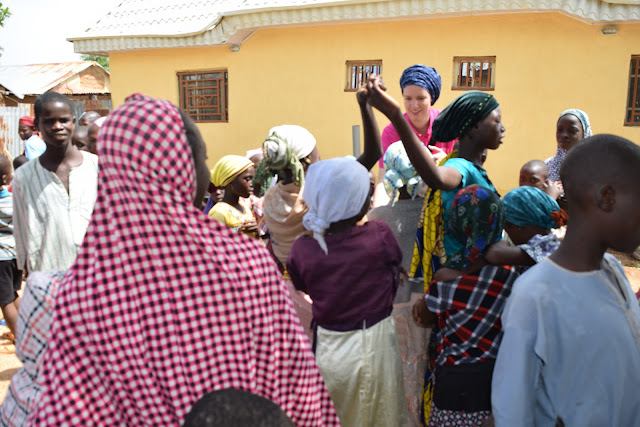 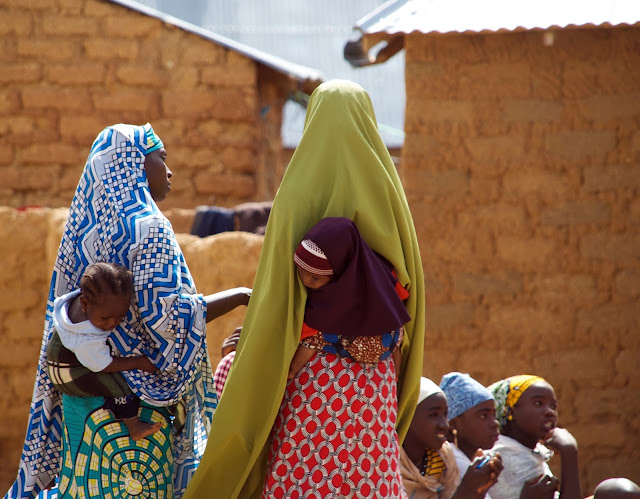 After a while, I went around to the front of the church to consult with one lady who was having leg pain after a recent delivery--thankfully that was an easy thing to diagnose and treat--and when I turned around I had eight little people following me!

I kept sensing that we were missing an important opportunity to share God with these young hearts, so I went back to one of the "mamas" who had been helping us with the games and asked if she'd be willing to translate as I told a simple Bible story. She helped me get all the kids seated on the ground under the mango tree and found someone else who was more comfortable listening to and translating my American accent.

I started telling the story of David and Goliath--complete with acting parts of it out and asking the kids to repeat along with me all these strange names. They kids were excited to hear a story about a boy who tended his father's sheep since many of them are also shepherds or tend the family's cattle. When I got to the part about David picking up five stones from the brook, I asked each of them to pick up 5 little pebbles from where they were seated. Then when I acted out Goliath being hit in the forehead and falling over dead, a few of the boys followed along and keeled over too!

I wrapped up the story by telling them that whenever they face a scary problem, or a problem so big even grown-ups are afraid, they can pray and ask God to help them. I also shared with them that they don't have to be an adult to trust God, He listens to all of our prayers, and we can pray anytime and anywhere.

As I finished, "mama" asked if she could teach the kids a song that went along with the story. One of the other missionaries caught it on video:

Isn't that too cute!

When the song finished, we heard that the clinic was still going as the medicine we'd brought hadn't finished yet. I prompted J__ to tell a story and she decided to tell about Noah and the ark. I think this might have been her first time to talk to a group through a translator, but she did well! 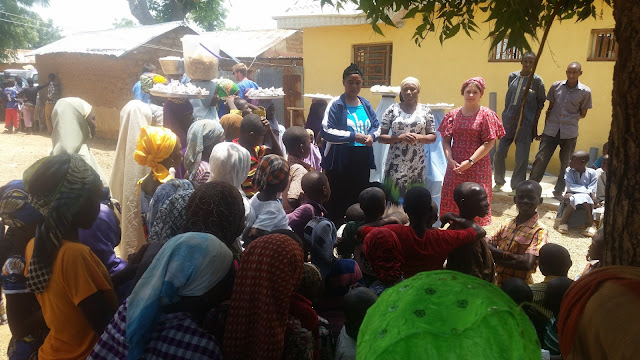 We were OK as long as Mama called out things like lions, sheep, dogs, cats, birds, goats, lizards, and snakes... but then she called out elephants, penguins, and kangaroos... that didn't go over so well!

Just as the kids were tiring from the song, the pastor came to tell us that the clinic was over and all the volunteers should go into the church building for a lunch and prayer. 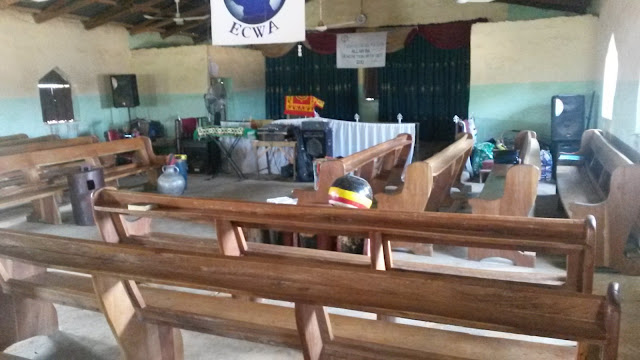 Then we took a couple more photos, waved goodbye to everyone, and loaded up in the vehicles to ride back to Kano. The van was absolutely silent on the way back as most of us fell asleep!

We went back for a rest, then met up again for dinner. The first place we went to was lauded for its yummy Lebanese food, but when we arrived at 6:30pm all the staff were "on break." When they came back at 6:45, the cook informed us that he didn't have enough food for all of us. We drove to another place which was supposed to have really good pizza. We ordered our food about 7:15pm and finally ate about 8:30pm... but it was TOTALLY worth it!
I really enjoyed the medical outreach, but not for the reason I thought I would. I thought that it would be wonderful to partner with the local church to provide care for a remote village, and I thought it would bring our team together. The outreach did do that, but more than that, it taught me that I can get the attention of fifty plus kids with nothing other than my limited Hausa and demonstrating a game. And that I can keep those same kids' attention with the help of a willing translator, the shade of a mango tree, and a plethora of Bible stories. I'm so grateful for the training I've had through Child Evangelism Fellowship, Children's Institute, and volunteering as a camp counselor and Sunday School Teacher. These kids were a very forgiving audience, and honestly didn't matter if they were laughing along with the story or at my languge faux pas as I said, "you great!" instead of "you count!" during the clapping game. Oh wells. :)