When moving to Africa, bring a sewing machine...

This is my grandmother's all-metal Pfaff sewing machine originally purchased in Hong Kong in 1955 (per the original receipt we found). My grandfather was in the US Navy and the family was stationed in the Philippines during that time, so he must have purchased during his tour of duty. This lovely machine has been sitting in our attic through several moves, but with some TLC at the local sewing machine store and some persistence to find repair parts, it has a new life with a new generation of the Farr family. 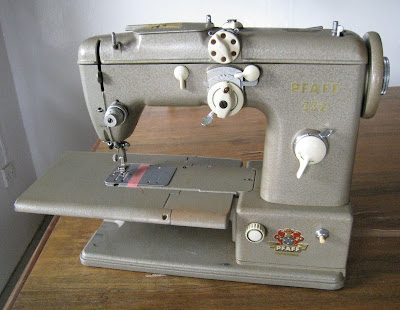 Who would bring a sewing machine to Africa? And who would bring one that weighs 27 lb. (with an additional 6 lb. of accessories and cords and an 8 lb. transformer to allow it to run on 220V)?

American Airlines doesn't weigh carry-on bags. So on the day I left for Africa, I checked in my other bags at the counter in the DFW airport, strolled through security with this heavy bag, hoisted it up on the scanner belt... and I can't possibly imagine why this hunk of metal set off the alarm or why the TSA officers wanted me to open my bag up so they could check it and verify it really was a sewing machine!

When I got to the gate and asked the gate agent if I could courtesy check my carry-on all the way through to Abuja, Nigeria, he said, "that'll fit in the overhead compartment." I replied that I knew it would fit, but I didn't think I could get it up there. He gave me a funny look like it doesn't look that big and you're tall enough to put it up there. Then I told him "It weighs 61 lbs" and followed it with "I'm moving to Africa, so I stuffed my luggage!" He laughed and happily agreed to check it for me, making sure to add not one, but two orange "HEAVY LUGGAGE" tags as he wheeled my bag down the jet bridge.

The porter who assisted me at baggage claim in Abuja and wheeled the cart with all of my luggage through customs and immigration also struggled with this particular carry-on bag. I didn't feel like explaining to him, but I think he probably chocked it up to me being a crazy baturiya (white female).

I'm so glad I brought the sewing machine. I've had a zipper on a skirt break and another skirt's elastic bust. And over the last two weeks I made this dress.

Did you know that you can find free dress patterns online? But beware, it may print out on 46 sheets of A4 paper, requiring you to piece them together with tape (Nigerian scotch tape is pretty crummy), then cut out each pattern piece. This process may take upwards of three hours.

Also, beware of picking a pattern that has 12 gores! It will take a very long time to sew and you will go through an entire spool of thread, requiring you to walk the 1.5miles to the market to buy another spool of thread for 500N ($1.40USD).

Also, beware that you might put the whole dress together including the 18" zipper (which you shortened from the 26" zipper that you originally bought because it was the only size available), and that you might try it on before adding the sleeves and the facings, and that you might not be able to even get it past your knees because the pattern sizes were completely wrong.

So you go back to market to buy another zipper because when you tried to reuse the other one, it completely shredded (Nigerian zippers aren't great quality), you cut out another strip to insert in the side seam and another two black triangle gores so now the dress has 14 pieces and 13 flare pieces. And now the dress finally fits, and you even had enough for a head tie (required in any Nigerian church, although I don't have to wear a head tie for my daily work.)

Was it mean to ask my house helper to iron the dress instead of taking the time to iron each seam flat?  By the time the dress was finished, I was tired of looking at it!