ƙadangare (lizard) is one of the first words I learned in Hausa class. We had just learned how to say things in the past tense as well as few household words. We were talking about what we had done the night before, and I said "Na yi wanke-wanke, or at least I tried to." I knew enough to say that "I washed dishes" but couldn't say more than that!

Mama B. asked what I meant that I had tried to wash dishes--had we run out of water? I said no, but there was a lizard in my sink! I had stacked a number of dishes in the sink, intending to get to them later, and when I reached in to put the sink stopper in, I felt something squishy and cold. It was a gecko that had decided to die in my sink on top of my dishes. How dare he!

These are what house geckos look like here. (It's a stock photo because there is no way that I would ever get this close to one intentionally!) They're almost transparent and have these tiny brown and black specks all over their bodies. 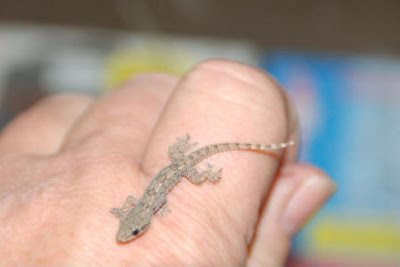 In other news, Nigeria has some of the prettiest lizards I've ever seen! Hausa doesn't have words for both "gecko" and "lizard." They're all ƙadangare (singular) or ƙadangaru (plural). These guys can be up to a foot long and they like to sit on the steps outside the apartment building sunning themselves. Thankfully, they're scared of us and scurry off in you get within about 10 feet of them. And as long as they don't dare come inside my apartment, we'll be friends. 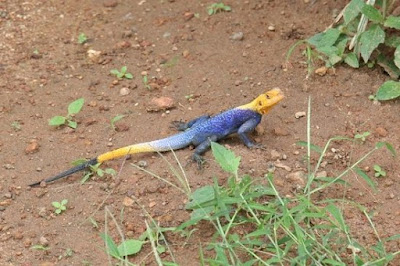