The Nigerian concept of time is quite different than our own in the States. This picture, while originally meant for South Africa, is still true in Nigeria: 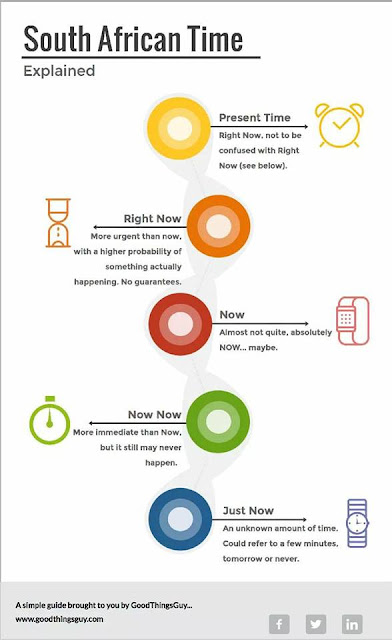 Anyway, God's timing is completely different than our timing. And I've never seen it more true than in something that happened last week.

Tabitha* (name changed) is from a village a few hours away, she has no formal schooling and speaks only her tribal language of Tarok. Tarok is only spoken in this state of Nigeria and as of 1998, fewer than 300,000 people speak it. According to some reports, it's a language that's on the edge of extinction. But for Tabitha, it's the only language she knows. She's the first woman I've met in the year I've been here for whom Tarok is her first language. Needless to say, we don't have a staff member who can translate for her.

She came about two months ago and although we found she didn't have a fistula requiring surgery, she did have significant passive leakage from the urethra and very poor pelvic muscle awareness/strength/endurance--she was a perfect candidate to see me in the pelvic physiotherapy clinic. The next day, she came to see me with her husband. We told the husband in Hausa what his wife should expect during the exam and what we'd ask her to do, then he translated for her and stepped out. My assistant and I stumbled through the exam, but I didn't really get good information because she wasn't able to understand our visual cues. Later, we called the husband back in and told him that I thought she could benefit from therapy and that we'd be happy to see Tabitha for about two weeks. They weren't expecting to stay that long and I could sense that they weren't happy about that. So I suggested they go home and come back when she was ready to stay for 2-3 weeks and to bring a woman who could speak Tarok/Hausa or Tarok/English who could translate for Tabitha. I tried to explain that Tabitha needed to understand her exercises in order to do them properly and that someone would need to be in the room with us during the PT sessions. Her husband, like most male relatives who accompany our patients, feel uncomfortable being present for any female medical exam/consultation.

So away she went. Then, two weeks ago, she comes back to see us for a Tuesday clinic. And there's no female relative with her, only her husband. We ask the husband if he is willing to stay for two weeks and if he can accompany her to each therapy session. He mumbled something and turned away, then Tabitha started to cry. We couldn't figure out what she was saying through her tears, and the husband didn't interpret for her. I was starting to get kind of frustrated because I wanted to help Tabitha and I really didn't want her to be discouraged and go to some traditional healer or try some expensive medication that I knew wouldn't work/might harm her. I wanted to help, but because of the language barrier, she was as trapped as I was.

About this time, a woman we'd seen a few patients earlier in the clinic poked her head in to confirm that the medications she'd picked up at the pharmacy were the right ones. Then she turned to Tabitha and said something that I couldn't understand. Tabitha lifted her face and stopped crying. Then the woman told us, "You know, I can speak for her. I understand Tarok."

Here's where the story gets really cool. Rose (her real name) has been a longstanding patient in the VVF ward. Her patient number has only three digits and right now we're up into the 3,700s! She's had several surgeries, but we've never been able to get her dry. She showed up in early April complaining of leaking stool and urine, and since she isn't a candidate for any future surgeries except for a radical diverting of her kidneys, she was sent to me to "see what I could do for her." (Oh I really love those kinds of referrals...)

Rose was very discouraged the first day she came to see me. She wouldn't look me in the eye, cried during most of the session, and I couldn't seem to get any straight answers out of her about her medical history. Finally, I gave up and because she speaks decent English, I just started asking about her life, her faith, and her community back home. We talked about God's promises that one day we will have new bodies and we will be with Jesus in a place where there is no more pain and suffering. We talked about how she can pray for good sleep every night and in Jesus' name rebuke the demonic influences she perceives in her dreams. We talked about how God has a purpose for her life and that she is not worthless, like some in her village have said. Ladi (the clerk who translates for me now) and I even shared how, although neither of us is married nor do we have children, we have purpose and we can do something productive with our time. And we just prayed for peace and comfort as she planned to stay at the hostel for a few weeks while attending physical therapy.

So fast forward about two weeks to the day that Rose came to see us in clinic to get a medication refill and bumps into Tabitha. Rose offered to stay as long as Tabitha needed, and that she would make sure that Tabitha came at the right time for therapy three mornings a week. I was a bit skeptical of using another patient to translate, especially when we're talking about abstract topics and working on muscle awareness and proprioception, but I didn't have any other option.

So I would tell Rose in English what I wanted Tabitha to do, she would translate, then Tabitha would do as I'd asked or ask a clarifying question back to Rose. When Rose didn't understand my English, Ladi would repeat my instructions in Hausa. It took a bit longer than a normal initial patient session, but by the end of it, Tabitha understood her home exercise program, I had good history and exam information, and I think even Rose understood her own problem and treatment plan better since her condition is somewhat similar to Tabitha's.

Both women have seen improvement in the last few weeks, and I've seen a huge change in both of their demeanors. Tabitha now smiles at me and tests out her Hausa greetings she's learned. Rose comes to greet me when I arrive in the keke each morning and we laugh as I ask the traditional greetings: "Yaya yau?" (how is today?), then "Yaya cikinki?" (how is your body?), and then our own special greeting, "Yaya zuciyarki?" (how is your heart?)

On Monday, Tabitha told me she is dry, and had been for three days. The things that used to elicit involuntary urine leakage no longer bother her, and she was doing all of her exercises as I'd told her. Her face was all smiles and we said together, "Sai godiya!" (praise God!) But when I told her that she could go home, her face fell. She told us, through Rose, that she wanted to stay until Rose was well so they could both go home together; she didn't want to leave her auntie. Rose encouraged her to go home and to reunite with her family, and to just trust God that He would bring her own healing in His timing. Then, just like I'd prayed for Rose that morning, I asked if Rose would pray for Tabitha in Tarok so that she would understand.

I wish you guys could have been flies on the wall in the clinic. What a sweet picture to see a patient praying for another, asking God for safe return journey, good reunion with family, continued health and provision for the future, and beseeching Him to bring her own body healing.

Today when I went to work, Tabitha was still around. Rose tells me that she's waiting for her family to send money for her return journey, and that she plans to go and greet Tabitha's family once she is healed herself. As Rose and I met for her therapy today and I thought quite hard to figure out why she's still leaking despite much improved pelvic musculature and a new medication regimen, we prayed again for God to heal her in His timing.

But regardless if God decides to heal Rose's body (whether through medical intervention or through divine healing) or not, He has already healed her heart and restored her joy. And He has brought her to us just in time so that she could play a role in the healing of a village girl who only speaks Tarok.