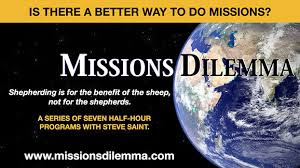 One of the courses the SIM organization requires for long term missionaries is called "The Missions Dilemma." It's a 7-part video series and workbook that's designed to open the eyes of North American Christians to how it feels to have "missions done to us," and thereby change how we live and serve cross-culturally. Much of it is  information that  was originally presented through the Perspectives course I took earlier this year, or are thoughts I've had while participating in short term mission trips over the last few years, but it's very helpful to have it presented in a concise manner.

Steve Saint is the course author/presenter. If his name doesn't ring a bell, what about the name Nate Saint? Or Jim Elliot? Steve's father and three other men were killed while reaching out to the Auca people in Ecuador in 1956. Steve's family continued to minister among the Auca people, and later Steve and his sister were baptized by two of the very same warriors who had killed his father. Steve went on to write the book "End of the Spear" which was turned into a movie in 2005.

One of the things I like best about the video sessions are the interviews with non-American Christians, many of them missionaries themselves. Their honesty as they talk about their experiences with North American missionaries coming in to do things for them, to identify their communities' needs and then design a master plan for meeting those needs, and to build churches with cement and galvanized tin roofs (completely foreign materials for many people groups!) is tough to hear. But I've seen it myself. I've committed many of those same mistakes in missions myself.

I'm starting to realize that simply by being white, I have influence (and often power) in many other cultures. Even if I were to live in a mud-brick hut, sleep in a hammock, and cook over an open fire, I would be viewed as wealthy. Even if I have a completely empty bank account, I'm viewed as rich, simply because I could pick up the phone and call someone who could send me money. Simply because I'm American, my words have clout. And most American missionaries don't even realize this. We dominate people simply because of who we are, and without concerted effort to build relationships and come in as learners, we will end up dominating and suffocating the very people we've come to serve?

How much better it would be to come into a community as a learner and to build relationships before I ever begin to open my mouth? How much more could I accomplish by partnering with the local body of believers, or by seeking out the "man of peace" that is open to the gospel? How much more sustainable would a building project or healthcare initiative be if I would assist the local people in doing for themselves and doing it in their own way with their own materials?

Often, I think missionaries feel like they have to have their lives together in order to be used by God. Maybe the American church puts missionaries on pedestals, touting their bravery, their dedication, and their sacrifice. But Steve said it this way, "People don't want to see that we've never suffered. Then we lose total credibility. They want to see that we have a wound where they have a wound, and that ours has healed." (Missions Dilemma, video session 3)

Much of my first term on the mission field will be dedicated to building relationships and becoming a student of the Nigerian culture. Praise God if I get a physical therapy clinic up and running or if I can start assimilating some patient data for a future research paper. But since I'm in this for the long haul, I MUST make sure that I build relationships that will last my entire missions career.

The missions dilemma is this: I want to "go and do." My supporting churches and friends are expecting me to report back results and numbers. However, I cannot burn bridges and dominate the very women I'm going to serve. 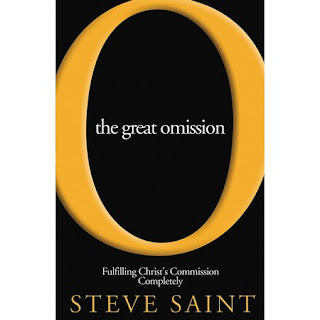 What do you think? Are any of these new thoughts for you? Feel free to write a comment below and let's dialogue some more.

And for anyone who's looking for a good group video series, this is it. It's pertinent for any American Christian, whether serving as a missionary, supporting a missionary, or simply engaging with God's heart for missions.