Sundays in Africa are wonderful! Pastor Samuel's wife was finally back in Togo and both of them came to pick us up for church. As honored guests we were given front row seats. :) Leo sat next to Dad and translated some of the opening announcements and welcomes.

Worship is very loud--think as loud as a concert--and the songs are very simple and repetitive. Some of them were in French, some in English, and some may have been in Ewe (a language spoken in Togo and parts of Ghana and Benin) for all I know. About 15 of the women/young women were dancing in the front of the church and Leo told me to go join them. I was a bit hesitant so he took my arm and pulled me with him into the line of women dancing! :) Ah well, at least with my African dress I sort of fit in!

There were probably over a thousand people in the church and as we attempted to turn the car around in the small parking lot (most people take zimis, walk, or have a motorbike) we had to wait for almost 500 children to exit from Sunday School. How they all fit in the building (same one as the Bible school picture from Day 2) I have no idea!

Mom commented that the women come dressed in their absolute finest! Beautiful fabrics tailored into gorgeous dresses, decorated tactfully with sparkles, embroidery, or beading. They all look like flowers! Honestly, it makes me sad that in America so many people barely dress up for church; and sometimes the entire church body is wearing t-shirts and everyday jeans and flipflops. Not saying that we should dress up and put on a front for God, but it does show something when most of the African people have very little and still make an effort to show up in clean, pressed, and tasteful clothing. OK, enough of my soapbox!

Pastor Samuel was to come pick us up at 3pm. This time, African 3pm really meant 4:15pm! :) Dad had asked to just meet with some of the pastors and get to know them; in Africa if you want people to come you must feed them. So Pastor Samuel arranged a beautiful dinner with 10 key pastors/pastor's wives. Dad started off by sharing a bit about what God's been teaching him, then he asked for them to share about themselves, give feedback on the conference, and ask any questions they may have about leadership or struggles they face in their churches. These pastors lead large churches and have several pastors and small churches under them. 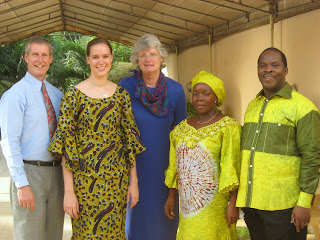 (Pastor Samuel Eklou and his wife, Madame Grace)
About 6:45 we agreed to finally start dinner! First off, Dad cut a beautiful cake they'd made for us! 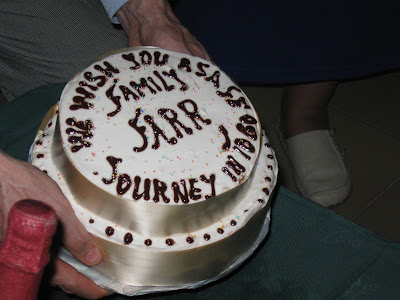 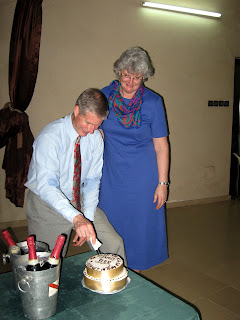 Then, an African salad of "coleslaw", sliced ham, cheese, and corn. 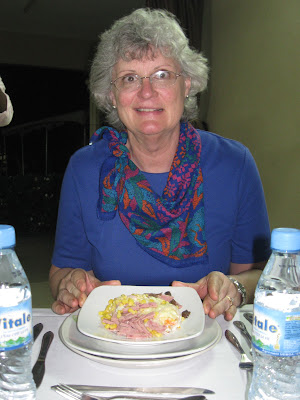 Then, a beautiful fish served with potatoes and green beans (I think these are the only 2 vegetables readily available-they're served all the time!) 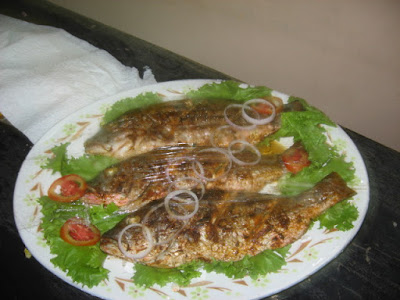 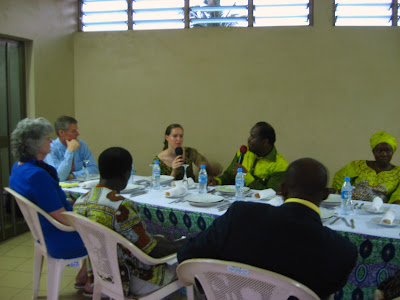 (the whole time we ate, we talked and answered questions) 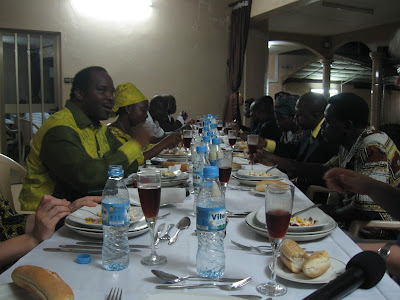 We thought we were done and were just waiting for the cake when they brought out fufu! (see previous post for explanation of fufu) I turned to Pastor Samuel and thanked him for finally "taking us for fufu!" He said that although it's a traditional West African meal, they only make fufu when notable people come. We felt very honored and I was glad Mom and Dad could try it! 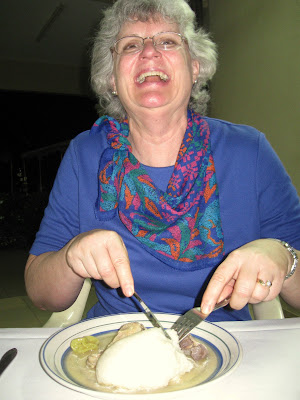 (Mom is eating it "proper-like") 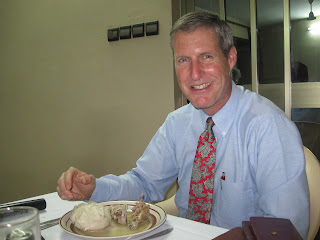 (Dad is eating it with his fingers) 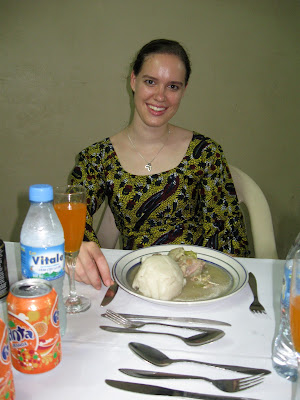 Then, the cake. Then finishing up any questions they had and taking the car back to the hotel. Here is the church van with its hood up; in Africa if you have a nice-ish car you don't leave it unattended in a parking lot... it could disappear, or in the best case scenario the battery gets stolen. Pastor Samuel always has one of his underlings/translators/jack-of-all-trades guys come with us and watch the car. :) 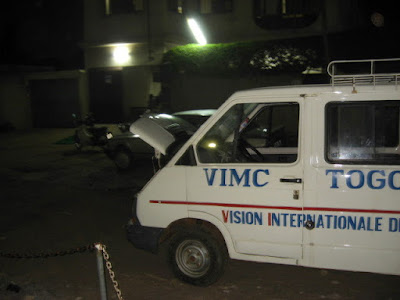